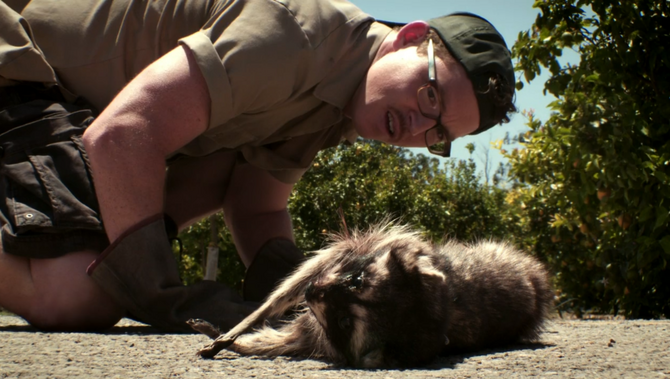 Lived in the wild,
Omnivore

Raccoon is an animal character in Season Five of the Showtime series DEXTER.

Dexter Morgan kills it to lure Boyd Fowler to a pickup spot.

When Dexter rents a moving truck he notices blood in the back compartment which intrigues him. He runs the history on who most recently rented the vehicle and finds the name, Boyd Fowler, a dead animal pickup officer. Dexter tests the blood and determines that it's human.

To arrange a meeting with Boyd, Dexter kills and sets up a raccoon on a rural road and calls it into the Department of Sanitation. Then he waits by his car until Boyd arrives in his yellow pickup truck.

Boyd: “Well, well, well. What do we got here?”
Dexter: “Raccoon.”
Boyd: “You call this in?”
Dexter: “Yeah, I did. I was driving down the road, and… I saw it. Kind of creeps me out. You're probably used to seeing dead things, though, huh?”
Boyd: “Can't say I ever get used to it.”
Dexter: “I don't usually come this way, but I'm in the middle of moving to a new place. It's a hassle, huh? Moving?”
Boyd: “I wouldn't know.“
Dexter: “No?”
Boyd: “Lived in the same house for over twenty years.”
So why did you rent a moving van?, Dexter thought.
Boyd: [as he looks at the raccoon] “Hello there, Bandit. This don't look right.”
Dexter: “What do you mean?”
Boyd: “Well, usually, you find a dead animal in the road, it means he was hit by a car. But there's no tire marks or blood on the asphalt. This raccoon was killed someplace else and dropped here.”
He's C.S.I.-ing me, Dexter thought, surprised.


Boyd bends down and scrutinizes the raccoon.
Boyd: “He's got defensive wounds on his paws. Little guy put up quite a struggle.” [Dexter smiles.]

Boyd lifts up the dead raccoon and tosses it into the back of his truck. He salutes Dexter and says, “Alrighty then.”
As Boyd drives away, Dexter waves at him. He's definitely peculiar. But I guess the best and brightest don't typically get into dead animal pickup.

Dexter and Boyd eye each other