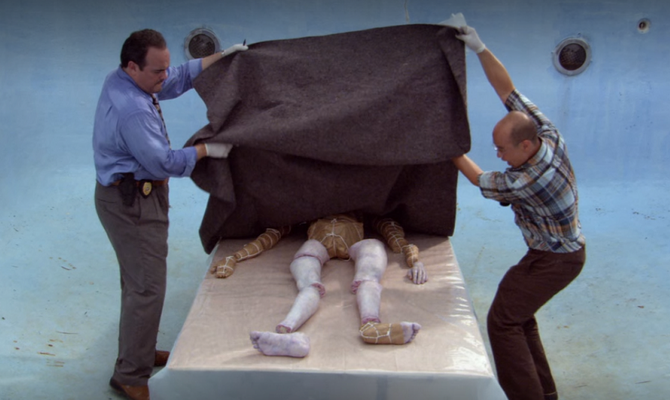 Prostitute
The Pool Victim is a character in Season One of the Showtime series DEXTER as well as the Dexter Novels.

She is an unidentified woman who was the first targeted kill of the Ice Truck Killer in Miami. Previously, Ice Truck Killer Victims 1 and 2 were found in Broward County, Florida. The next victim to be discovered is the Fountain Victim.

She was drained of blood, cut into multiple pieces, and left inside of an empty pool at the Seven Seas Motel. The location was frequented by hookers, and within Debra Morgan's district as a Vice undercover Officer.

Debra called Dexter Morgan to come to the motel. When he arrived, she informed him about Ice Truck Killer Victims 1 and 2, and how they were killed in a similar manner within the last five months. She said it must be the work of a serial killer, and that she wanted to catch the killer before he took out another one of her girls.

Dexter walked over to the crime scene, where the body was being examined by Detective Angel Batista and Forensic specialist Vince Masuka. They unveiled the body for Dexter, which showed there was no blood in or outside of the body, which fascinated Dexter.

The identity of this victim was never revealed, but she was likely (as well as the Broward victims) one of several named victims on the blood buckets found in Brian Moser's Residence.

The body was cut into 20 pieces (4 pieces one leg, 3 other leg, 4 pieces for both arms, 4 for the Torso and a Head) with the foot being separated at the ankle on both legs but only the right leg separated at the knee, then midway up the thigh.

The left leg was cut in a similar fashion; however, on the final cut of the leg, at mid-thigh. he stopped as if interrupted. Each of the arms were cut into 4 pieces like the right leg and the Torso, for the most part, appeared to be whole.

The head was left to the side. Of note, the entire right arm was wrapped in brown paper, as well as the entire torso. The left arm was done the same way, except that the hand was left uncovered and the left foot was mostly wrapped up with the toes exposed.

The Pool victim and other scenes from Episode 101 are depicted on the second chapter of the video game. Dexter is called by Debra to the crime scene. There he founds the victim and is astonished by the discovery and by the scenery, mainly the fact the victim has no blood in or out her body.

Partial cut on leg, as if interrupted

The Game character
Community content is available under CC-BY-SA unless otherwise noted.
Advertisement