Weller has appeared in more than 70 films and television series.

His TV credits include roles on The Handler, Odyssey 5, Monk, Fringe, House, Psych, Franklin & Bash, Sleepy Hollow, 24, Sons of Anarchy, Longmire (both as a director and actor), and The Last Ship.

Weller was born in Stevens Point, Wisconsin, the son of Dorothy Jean (née Davidson), a homemaker, and Frederick Bradford Weller, a lawyer, federal judge, and career helicopter pilot for the United States Army. Weller had a "middle-class Catholic" upbringing. As a result of his father's army work, Weller spent many years abroad during his childhood. His family lived in Germany for several years before eventually moving to Texas, where he attended Alamo Heights High School in San Antonio.

While enrolled at North Texas State University (now the University of North Texas), he played trumpet in one of the campus bands. He graduated with a Bachelor of Arts in Theatre and began his acting career after attending the American Academy of Dramatic Arts.

In 2004, Weller completed a Master of Arts degree in Roman and Renaissance Art at Syracuse University, Florence Italy and occasionally taught courses in ancient history at the university. In 2007, Weller began a Ph.D. at UCLA, in Italian Renaissance Art History. In October 2013 he filed his dissertation, entitled "Alberti Before Florence: Early Sources Informing Leon Battista Alberti’s De pictura", and was awarded his doctorate in 2014.

On his 59th birthday, Weller married his longtime girlfriend, actress Shari Stowe, at the Santa Maria Assunta church in Positano, Italy. Among the guests attending the wedding were Carrie Fisher and Marg Helgenberger. 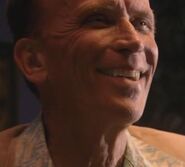 Add a photo to this gallery
Retrieved from "https://dexter.fandom.com/wiki/Peter_Weller?oldid=83242"
Community content is available under CC-BY-SA unless otherwise noted.