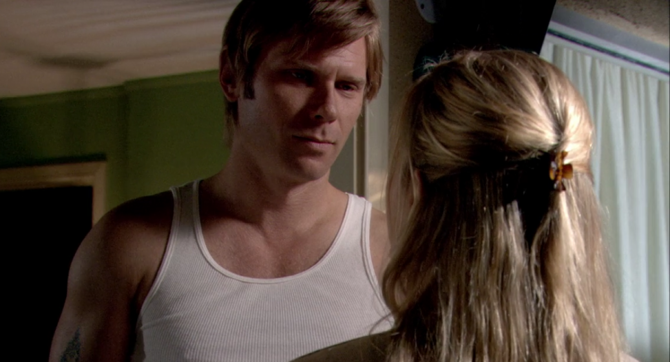 Bludgeoned with pipe in prison

Paul Bennett is a character in the Showtime series DEXTER.

He was the abusive husband (later divorced) of Rita Bennett, as well as the father of Astor and Cody Bennett.

Due to his drug use of crack and heroin, Paul owed money to a drug dealer, Ricky.

Paul was a tall Caucasian male in his late 30s. He had dirty-blonde mid-length hair which was cut shorter while in prison.

Unfortunately, Paul was a manipulative rapist and spousal abuser, often harming Rita to express his violent temper. He threatened to find her if she ever left him. Despite this, he loved his children and loved having a family. His son, Cody was too young to remember his monstrous behavior. Astor, being slightly older, knew all too well as she had memories of him before he went to jail.

He strongly disliked Rita's new boyfriend, Dexter Morgan, as he felt that she belonged to him. Unknown to Paul or Rita, Dexter was a successful serial killer who (initially) was looking for a relationship to appear "normal."

Paul's continued pestering of Rita and the kids led to Dexter taking matters into his own hands. However, he did not kill Paul. Instead, he set it up so that Paul was arrested and, ultimately, met his death by another prisoner.

Paul Bennett was born to Bill Bennett and his wife, Maura, who lived in Orlando, FL. Much of Paul's early life prior to meeting Rita Brandon is unknown, except that he was prone to getting in trouble.

Rita was born in Michigan to Gail Brandon, but moved to Miami where she met and married Paul. They soon had two children from the relationship - Astor and Cody. They lived in a house that Paul had obtained through a drug trade before they met ("Circle of Friends").

Paul frequently abused his wife. One night in particular, when he repeatedly beat and raped Rita, his daughter, Astor, called the police. Officer Debra Morgan was the first to respond on scene to the domestic violence report. Paul was promptly arrested. He was sentenced to eighteen months in prison, but was released after only six months due to overcrowding and good behavior.

Over six months have passed since Paul was jailed for his abuse, and Rita is dating Dexter Morgan. One day, the two of them and the kids were outside planting a small tree when a dealer of Paul's named Ricky walks up looking for the money which Paul owes him for "two ounces of blow." Dexter makes a move towards Ricky, but Rita tells him to not get involved. After being obnoxious to Rita, he decides to take her vehicle as payment and orders Rita to give him the "fucking car." Dexter glares at him and tells Rita to get the key, which she throws at Ricky. He quickly gets in the car and drives off screeching the tires. In her dedication to put Paul and her past life behind her, Rita refuses to file a police report.

Astor's birthday is approaching, and she asks her mother for a coconut cake. Paul phones Rita to tell her that he is out of jail due to overcrowding and good behavior, and Rita's attitude of joyful bliss vanishes. Astor tells Cody that their mother only acts like that when talking to their dad. Paul wants to come to Astor's birthday party and Rita initially tells him she'll think about it. Cody is very excited that his dad might be coming home, not knowing why he went away in the first place. He blabs about it at school and several parents decide to keep their children away from Astor's party. Due to this, Astor becomes increasingly depressed, so Rita calls Paul and orders him not to come anywhere near the party. Afterwards, Rita assures parents that Paul won't be there and the children are again allowed to attend the party.

Rita is furious when Paul picks up the children from school without her permission. He later brings them home safely, alleging that he had left a message for her. He meets Dexter and clearly disapproves of him.

Despite being told to stay away and Rita having a restraining order against him, Paul shows up to visit the children, trying to win them over, as well as Rita. Cody is thrilled by his visits but Astor (who remembers his abuse) isn't happy to see him.

One afternoon, while Rita is not at home and Dexter is watching her kids, Paul arrives at the door. Dexter tells Paul that he isn't comfortable letting him inside. This angers Paul, and he asks Dexter, "Are you fucking my wife?" He goes on to inform Dexter that the house is in his name and he can just walk in. However, when Dexter remarks that perhaps he should just call the police, Paul backs off. Before Paul leaves, he throws a punch at Dexter's face, narrowly missing him. Dexter merely smiles and asks, "Is that it?"

Later, Rita visits Paul at his motel and orders him to sign the divorce papers, which he had refused to to do while he was in prison. In return, she promises to let him have supervised time with the children once a week. He agrees and, eventually wins Astor over by promising not to harm Rita again.

For a while, everything seems to be going okay, and Paul is even friendlier to Dexter. Under pressure from Paul, Rita breaks a lunch date with Dexter to spend time with Paul and the kids. This causes Rita to realize that she is falling back into her old patterns.

She and Dexter have sex for the first time, after which Dexter asks if he freaked her out. Rita replies that nothing he could ever do would scare her away.

Rita goes away for the weekend with Dexter, which angers Paul. He is forced to miss one of his supervised visits, and had paid for tickets to the circus. Rita promises to make the session up to him, While Rita is out of town, Paul makes an annoying phone call to her, sounding a little drunk.

When Rita returns home, Paul shows up at the door, intoxicated. He pushes his way inside and yells that he is the head of the family. Rita asks him to leave but he refuses. Nervously, Rita attempts to calm him down and, to protect the kids, takes him into her bedroom. When she tries to leave the room, Paul grabs her and and throws her on the bed. Knowing that she is about to be raped, Rita whacks Paul over the head with a baseball bat, which knocks him unconscious. Rita wakes up the children and they flee to a neighbor's house. As a result, Paul ends up in hospital.

The next morning, the locks are changed on Rita's house and Dexter gives her pepper spray. Later, while Rita is working at Z Hotel, officers from the Miami Dade Sheriff's Department approach her. They inform a shocked Rita that Paul has filed assault charges against her. They take Rita in for questioning, causing her to worry that she will lose her job and kids.

A lawyer soon meets with Rita and asks about the night she hit Paul. Rita explains that she only invited him into her bedroom to avoid cracked ribs and a broken jaw. The lawyer tells Rita that Paul is a model parolee with clean drug tests, and advises her to not deny any more of Paul visitations with the children. He mentions the upcoming deposition. Dexter attends the deposition with Rita, and they both learn that, because she violated a custody agreement, she might indeed lose her children.

Later, Paul picks up the children to take them to the circus, accompanied by a court supervisor. Dexter takes this time to break into Paul's motel room, finding pot and a gun.

After Paul brings the children home. he tells Rita that he will drop the charges if she agrees to unsupervised visits. Rita replies with, "Fuck you," and storms off. Paul ends up talking to Dexter in the kitchen about his children. Dexter becomes increasingly annoyed and, after Paul calls Rita "that skinny bitch," Dexter slams him on the head with a frying pan, knocking him unconscious. He carries Paul to his car, unseen by Rita. Dexter then delivers Paul to his motel room where he shoots him up with heroin and places his gun nearby.

Soon after, Rita's Lawyer informs her that Paul is back in jail and will stay there, having violated Florida's Three Strikes Law. Rita is ecstatic.

Rita still hasn't told her kids that their father is back in jail. When Astor asks if he is coming over for Christmas, Rita hesitates on her answer. The children realize where Paul is, and blame Rita. Cody misses his dad so much that he secretly goes to the playground and waits for Paul to show up. Rita is frantic with fear but Dexter figures out where Cody went and they bring him home.

Rita visits Paul in lockup and says that she will allow him to see the children if he explains to them why he is there. Paul insists that he doesn't know why, but agrees to do as she wishes. The children are let in, and Paul becomes emotional.

Paul still doesn't understand how he got from Rita's house to his motel, but he is starting to suspect that Dexter knocked him out. He tells Rita that Dexter is hiding something, and begs her to look for his shoe which he seems to have lost at her house on the night in question. Rita finds this hard to believe, and hangs up on him..

Despite Paul's repeated pleas, Rita doesn't help him verify his story by looking for his missing shoe. However, on one afternoon when she is taking out the trash, Rita notices the shoe on the ground and realizes that Paul may be telling the truth.

Paul is still in prison and gets regular visits from his children, who are happy to see him. He continues to call Rita about the shoe in order to use it as evidence at his appeal hearing, but Rita doesn't allow his lawyer to come over, and she doesn't see how the shoe can be used as evidence.

Again, Paul calls Rita and tells her that he doesn't think he can survive in prison, but Rita ignores him and hangs up on him. She later gets a phone call that Paul had died in prison after getting into a fight with another prisoner. It's revealed that he was bludgeoned to death with a pipe. Rita feels guilty for not heeding his warnings and concerns for his safety, but also a sense of peace knowing that he is gone.

Against Dexter's advice, Rita is insistent on giving Paul a proper burial, not a state one. Rita, Dexter, Astor, and Cody are the only people who attend his funeral, aside from the priest who leads the ceremony. Cody and Astor's love for Dexter softens the blow of losing their father,

Not long after, Rita confronts Dexter with Paul's shoe and, due to his evasive answers, she is convinced that Dexter is also a heroin addict, like Paul. 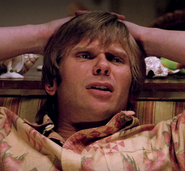 Paul in prison
Community content is available under CC-BY-SA unless otherwise noted.
Advertisement