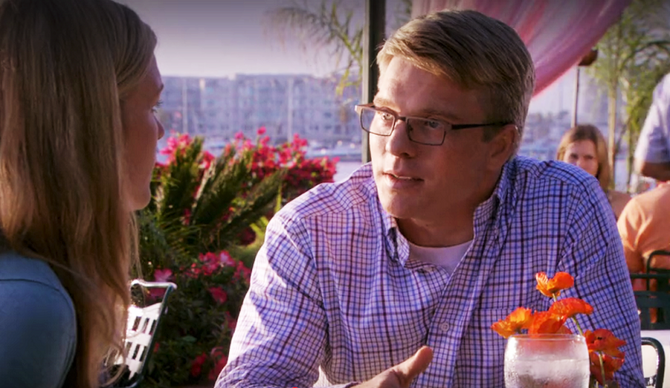 Owen is a character in Season Five of the Showtime series DEXTER.

He is the ex-fianceé of Lumen Pierce.

Owen is a man in his early 30s with light blonde hair. He wears glasses, as well as a blue-and-white button-up shirt over a white undershirt with brown khaki pants. Owen appears to be of average, muscular build.

Owen is still in love with Lumen even though their wedding day ended badly as that is when she decided not to marry him.

Back in Minneapolis, Owen almost married Lumen, but she realized she didn't want to settle down into that kind of life. He never learns that, after she moved to Miami, she was abducted and nearly killed by the Barrel Girl Gang.

Lumen receives an unexpected call from Owen when he arrives in Miami in search of her. Addressing her by "Lu," he asks how she is, and bets that she's tan because the sun feels closer here. Realizing where he is, she asks if he's in Miami, and he jokes that he got a sunburn just renting the car. He says that he has respected her wishes and did not call, email, or text her since the day she left. He tells Lumen that his life stopped that day, and he feels "stuck." He thinks the way for him to get "unstuck" is to see her face-to-face without seventy-five of their friends and family staring at them. He begs her to see him. They arrange to meet at a cafe across the street from the Blue Pelican Motel (where he is staying) at noon the next day.

When they meet, Owen hugs her, but she cringes. He tells her that she looks beautiful and voices a concern that she's met someone else. Lumen denies it. The two talk for awhile about their past and family.

Eventually, Owen presents a pair of tickets for a round-the-world trip and asks her to go with him, pronouncing that he still loves her. Lumen hesitates, but he remains patient, and gives her the option to tell him her final decision the following night. However, he waits in vain and she never shows up. Owen tears up Lumen's ticket and storms off...apparently to take the trip around the world on his own.

Owen calls Lumen from his motel

Owen waits in vain for Lumen
Add a photo to this gallery
Retrieved from "https://dexter.fandom.com/wiki/Owen?oldid=107968"
Community content is available under CC-BY-SA unless otherwise noted.