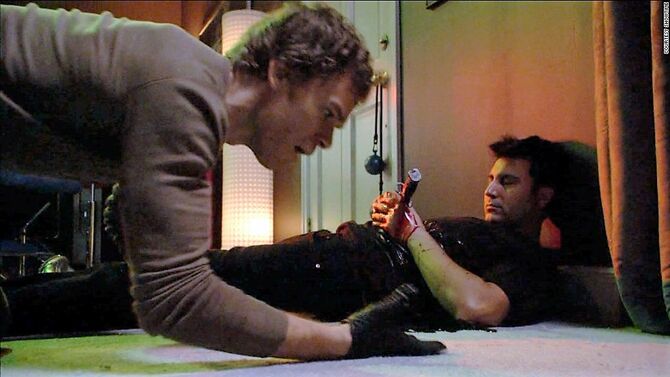 Stabbed during a struggle

Youth Center Coach
Oscar Prado is a character in Season Three of the Showtime series DEXTER.

He is the younger brother of ADA Miguel Prado and Sheriff Ramon Prado, a drug user, and one of the few victims that Dexter Morgan killed while not following all rules of the Code of Harry.

Oscar was first seen in the home of a drug dealer, Fred Bowman aka Freebo, (who was Dexter's selected victim). Oscar was attacking Freebo with a knife. Dexter's sudden appearance distracted Oscar long enough for Freebo to escape and Oscar immediately turned his attention to Dexter. The two struggled and Oscar knocked a loose crown from Dexter's tooth, before Dexter managed to turn the knife around and stab him in self-defense. A shocked Oscar gasped, "Who are you?" as he fell back against a wall, to which Dexter replied, "Who are you?" Seconds later, Oscar was dead (which troubled Dexter for killing a possible innocent).

Oscar's body was examined by Dexter the next day at the crime scene, where his brothers, Ramon and Miguel Prado, were also present. Dexter attended Oscar's wake, because Miguel had invited him, and Dexter wanted to learn more about the man he had killed, concerned that he broke "the code."

At first, it was believed that Oscar died doing his duty as a community organizer who was simply confronting the local drug dealer, but Debra Morgan learned from a police informant, Anton Briggs, that Oscar was actually a drug user and in Freebo's debt. Although he was not a killer, Oscar's drug use and attempted murder of both him and Freebo made Dexter feel better about having killed Oscar.

Freebo and Oscar engage in a fight