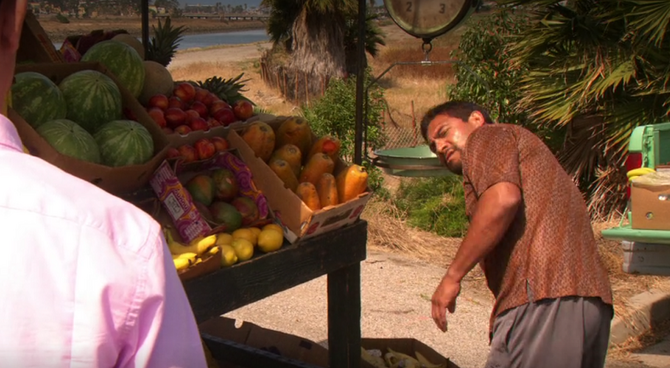 Fruit Vendor
Omar Rivera is a character in Season Six of the Showtime series DEXTER.

He is an ex-convict who used to work for Brother Sam at his body shop, and then ran a fruit stand beside a freeway in Miami.

Omar is a man of Hispanic descent with black hair and a mustache with beard. He wears a silk orange patterned shirt and a pair of tan pants with black shoes. He also appears to have a tattoo on his right upper arm.

Omar, when he's shown alive, doesn't say a whole lot, but according to Brother Sam he was a man "who got rid of his demons" and was starting out anew. Omar had links to a drug cartel and was likely arrested on possession, eventually going clean as he came out of jail. This suggests that Brother Sam helped him reform and become a normal citizen in society rather than a man dwindling back into a life of crime. Sam is convinced that Omar did not have his death coming, that he didn't deserve to go out that way.

According to Sergeant Angel Batista, Omar Rivera had links to the Salas Cartel and was likely arrested related to drugs. After he got out of jail, he went to work for Brother Sam before going on to be a fruit vendor and was last seen by Sam a few months before needing new breaks for his pickup truck.

Omar Rivera is seen working at a fruits and vegetables stand beside a busy street in Miami. Little does he realize that Travis Marshall is observing him from a distance.

Travis makes his way over to Omar, introducing himself with a verse from Revelation in the bible:

"In the midst of the street was the tree of life, which bears twelve manner of fruit and yielded her fruit every month."

Omar didn't respond to this and instead asked if he needed anything fruit-wise, to which Travis asked for oranges. Omar nodded and repeated the term in Spanish, bending over and facing away from Travis to get the oranges. While doing this, Travis removed a large blade from his bag and approached Omar, striking him in the back of the head. He was then dragged down behind the fruit stand and stabbed with the blade, thus ending his life. Omar then had his intestines removed and placed on a scale at the stand. They were replaced with seven baby snakes sewn in by the Greek pattern for Alpha and Omega.

His body was later dumped offshore to wash up on a beach. A jogger calls in the body, and Dexter Morgan and team arrive to investigate. Upon lifting Omar's shirt, they find strange stitching of where he was cut open. His wallet reveals his name and address.

Suddenly, Omar's stomach begins to move and Dexter cuts open a bit of the stitching, To everyone's astonishment, seven baby snakes slither out from the open wound,

Omar becomes the first major victim of Travis Marshall, and the quote Travis told him related to the tableau.

Travis watches Omar from across street

Travis pretends to be a fruit buyer

Travis holding the Sword of John the Revelator

Omar's intestines in The Scales of Justice