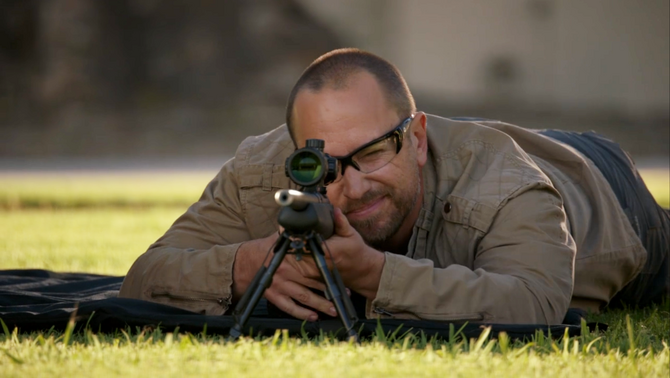 Stabbed in the back by Dexter Morgan on Isaak Sirko's orders

Shot his victims from a distance

Money
Loyalty to the Brotherhood
Oleg Mickic is a character in Season Seven of the Showtime series DEXTER.

He was a Russian ex-soldier turned hitman working for the Koshka Brotherhood.

Oleg, along with Benjamin Caffrey, are hired by the Koshka Brotherhood to kill Isaak Sirko. Since Isaak had "made both men rich" in the past, he calls Oleg in an attempt to keep them from killing him, hoping that they have some loyalty to their former employer. However, Oleg tells Isaak that they had already accepted the contract, and they would be after him.

At first, Isaak tries to get Dexter Morgan to help by saying he'll let him live. That doesn't work so he has his bodyguard, Jurg Yeliashkevych, kidnap Hannah McKay, threatening to have her killed unless Dexter kills the hitmen. When Dexter agrees to help, Isaak informs him of both hitmen's method of killing. Oleg prefers to use rifles, which he always buys local to the locations of his hits, killing from far away, whereas Caffrey prefers to kill up close by stabbing or garrote.

Dexter goes to a shooting range, where Oleg is testing out his rifle for the kill. When he lies down on his stomach to take a better shot, Dexter gets behind him, and stabs him in the back while covering his mouth to muffle any screams.

Not much is known about either hitman. Oleg apparently had a sick mother, since when Isaak called him his first question was, "How's your mother?" to which Oleg replied, "Good days and bad."

Mickic misses his shot as he is stabbed

Mickic is killed by Dexter at a shooting-range
Community content is available under CC-BY-SA unless otherwise noted.
Advertisement