Octavio is a character in the Dexter Comics.

He was one of Steve Gonzalez's henchmen.

After Steve Gonzalez incapacitates Dexter, he calls Octavio to help transport him to Mar Dorado.

After Dexter wakes up, he threatens Steve. Octavio tasers Dexter to teach him a lesson. During the following days at Mar Dorado, Octavio is Dexter's supervisor and forces him to work as a slave. He constantly beats up Dexter, most notably, after Dexter cuts the tongue of a co-worker.

Dexter and Deborah are reunited in a warehouse on Mar Dorado. Steve is ready to kill them both when he is interrupted by the arrival of the feds. Octavio is ordered to finish off Dexter and Deb. Meanwhile, Dexter manages to cut loose his bonds. He is about to kill Octavio with the same pitchfork that Steve used to threaten him and his sister, but he is interrupted by Deborah's cry of help. Nevertheless, without Deb watching, Dexter manages to stab Octavio in the neck with the pitchfork, killing him. 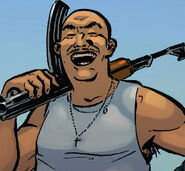 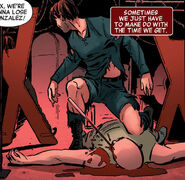 Retrieved from "https://dexter.fandom.com/wiki/Octavio?oldid=111985"
Community content is available under CC-BY-SA unless otherwise noted.