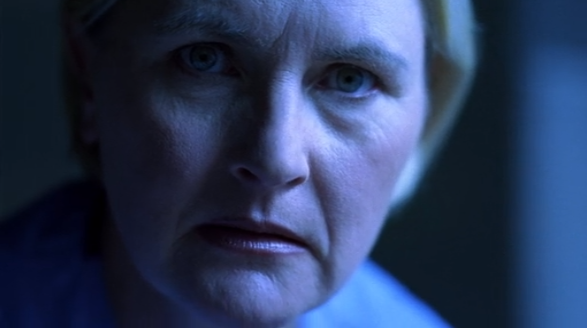 She Injected victims with overdoses of an unknown drug mixed with morphine, causing them to die. She then collected their obituaries as trophies in a scrapbook.

None. Mary left her victims where they died.

Mary killed under the excuse that she was taking away her victims' pain.
Mary ("Last Nurse" and "First Nurse" in novels) is a character in Season One of the Showtime series DEXTER.

She was an "Angel of Death" nurse (serial killer) working at a time when Harry Morgan was hospitalized for heart problems.

Mary would kill patients under the delusion that she was "taking their pain away." She kept their newspaper obits as trophies in a scrapbook.

In 1991, while Harry Morgan is being treated in a hospital for heart disease, he realizes that his nurse, Mary, is slowly poisoning him with overdoses of morphine and an unidentified substance. He gives Dexter Morgan (age 20) the go-ahead to kill her in order to stop her from killing him and any more people.

Dexter breaks into Mary's house and covers a room with plastic. He dons a full plastic suit with gloves. (Casual clothes are worn underneath.) He waits for Mary to arrive as he holds a syringe (which is ironic because Mary herself killed via syringe). Dexter fails to sedate her in this way, though, and is forced to overpower her in hand-to-hand combat. After he strips Mary of her clothes, he covers her in shrink wrap and secures her to a table with duct tape.

When Mary awakes, Dexter reminds her of her crimes (via her special trophies scrapbook, where she keeps obituaries of her victims). Mary claims that she helped them by putting them out of their misery. However, Dexter throws her words back at her by stating that he is going to take her pain away.

Dexter gags Mary again and repeatedly stabs her, which is quite messy with her blood spraying onto him. He then dismembers her by hacksaw and tosses her remains into the Everglades.

Dexter's intervention prolongs Harry's life another year before he dies (from suicide).

Since Dexter did not take a blood slide from her or dispose of her in the Underwater Graveyard, the police never knew she was a Bay Harbor Butcher victim. An investigation into her disappearance is never mentioned, and it is unknown if the police ever discover her crimes.

Mary's scrapbook of her victims