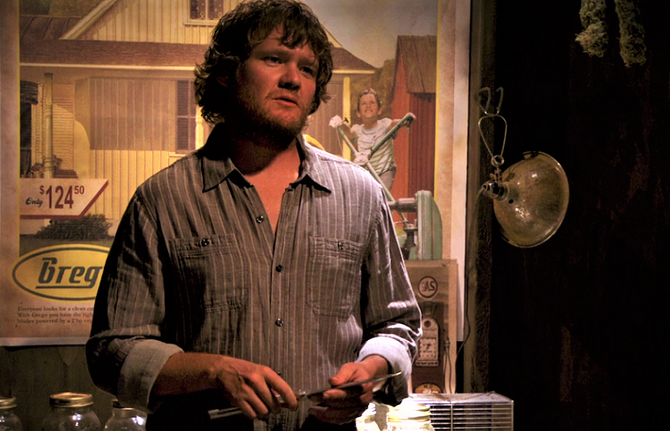 Norm is a character in Season Six of Showtime's series DEXTER.

He owned the Shady Lane Motel where Dexter Morgan stayed in Kearney, Nebraska. Norm made a fatal mistake when he tried to extort money from Dexter.

At first, Norm appears to be a helpful, though overly inquisitive guy. His small talk, according to Brian, "could turn anyone into a homicidal maniac."

Later, he shows a more paranoid personality, believing that Dexter, due to his soft hands, is affiliated with the DEA, ATF, or FBI and will arrest him for the illegal pot plants he is hiding in the corn fields.

Norm is also greedy, and tries to extort ten thousand dollars from Dexter to get back his knives, believing that Dexter is rich due to his car.

Norm offers to fix Dexter's flat tire for $20, and says that the town is within walking distance. Dexter takes a shortcut through a cornfield, shortly finding marijuana plants.

Later, when Dexter arrives at Jonah Mitchell's house, he discovers that his tools and his forensics kit are missing from his trunk. However, he still investigates the house, which ends in a confrontation with Jonah.

Dexter returns to the motel to take back his kill tools from Norm. He finds Norm in a shed storing marijuana in glass jars. Norm tells Dexter that he will sell the knives back to him for ten thousand dollars. Dexter mockingly agrees, but demands his knives first.

Norm, thinking that their value is monetary, pulls out the gun that Dexter had stolen from a clerk and points it at him. Norm threatens Dexter, saying that he either gets the money or Dexter is a dead man. However, Dexter knows that the gun is empty as he had shot off all the bullets while driving. As Norm holds the gun on him, "Brian" grabs a nearby pitchfork, and stabs Norm in the stomach with it.

The camera pans, showing that Dexter is actually the one who impaled Norm. He removes the pitchfork, and watches Norm as he dies. "Brian" asks Dexter why he wakes up his victims before killing them, and Dexter says it's because he wants them to know what they've done. But "Brian" dismisses that, stating that it's because Dexter wants to watch the life leave their eyes, and it doesn't matter to him if they are guilty or innocent.

Dexter is faced with a dilemma as he can't dump Norm in the ocean. "Brian" comments that he can just leave his body out in the open since Norm is "a thief, a pot grower, and an asshole" which would explain his death. Dexter thinks of a better idea. He throws Norm into a silo, watching as his body sinks under the corn. Brian remarks, "Hope you took a souvenir." Dexter seals the silo and leaves to meet with Jonah Mitchell.

Dexter rents a room from Norm

Cornfield on the road to town

Dexter finds a pot farm in the cornfield

Norm and Dexter face off

Norm dead after Dexter impaled him with a pitchfork

Dexter throw's Norm's body into a silo
Add a photo to this gallery
Retrieved from "https://dexter.fandom.com/wiki/Norm?oldid=104872"
Community content is available under CC-BY-SA unless otherwise noted.