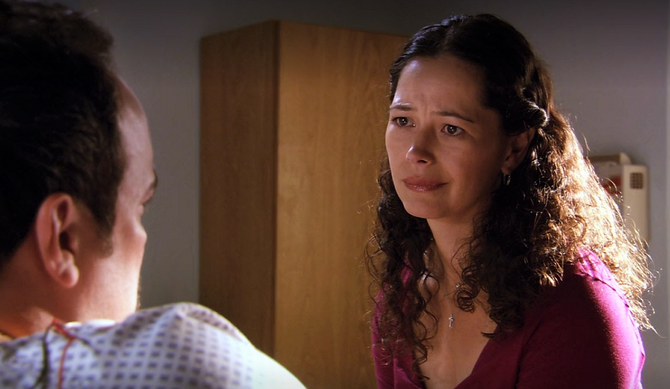 Nina Batista is a character in Season One of the Showtime series DEXTER.

She is the ex-wife of Sergeant Angel Batista and the mother of Auri Batista.

She is Latina and frequently has a sad or angry expression on her face.

While Nina was married to Angel Batista, they had a daughter together named Auri. At one point, Angel cheated on her and confessed immediately afterwards out of guilt. Nina was heartbroken and forced him to move out, although Angel hoped they would reunite.

The way that Angel talks about his wife to his work colleagues makes them think they are still together. He buys Nina a 10-year anniversary gift, hoping that she will forgive him. It doesn't work, but she allows him to see Auri before he leaves, demonstrating that she is not vindictive, just hurt.

Angel gets a raise at work and goes out with Dexter to celebrate, but he has too much to drink. Dexter drives Angel home and drops him on the couch. Nina enters the room, asking Dexter what they are doing in her house, and he explains about the raise. Nina informa Dexter that Angel does not live there anymore. Not sure what to do with Angel, Dexter takes him back to his own apartment to sleep it off.

While in a parking garage, Angel is stabbed by The Ice Truck Killer. Nina goes to the hospital to support and comfort him, causing Angel to hope that she will take him home. Nina states that she does forgive him, but their marriage is over. She reminds Angel that, while they were married, they lived a life of unhappiness. Nina and Angel subsequently divorce and Nina retains custody of Auri, though Angel has visitation rights.

Nina discovers forbidden food in Angel's hospital room
Add a photo to this gallery
Retrieved from "https://dexter.fandom.com/wiki/Nina_Batista?oldid=107110"
Community content is available under CC-BY-SA unless otherwise noted.