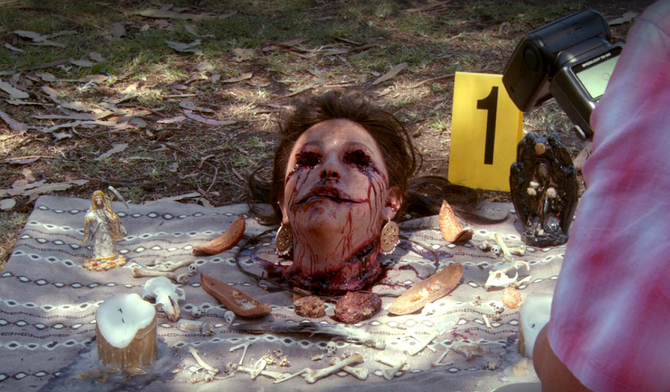 Nina Alfaro is a character in Season Five of the Showtime series DEXTER.

She was an unfortunate victim of Carlos Fuentes and Marco Fuentes,

Nina is the first discovered victim in the case, with her head being displayed in a grotesque manner. Her body was left nearby, discarded in a bush.

Nina was killed in the tradition of Santa Muerte with her head cut off, tongue cut out, and eyes removed by a machete. It was meant to warn others "you didn't see anything, and don't say anything," and to strike fear into them. Vince Masuka remarks that she was decapitated while still alive, but her eyes and tongue were removed postmortem.

Her husband, Francisco Alfaro is also killed although it appears as a murder-suicide, his face having been shot pointblank with a shotgun.