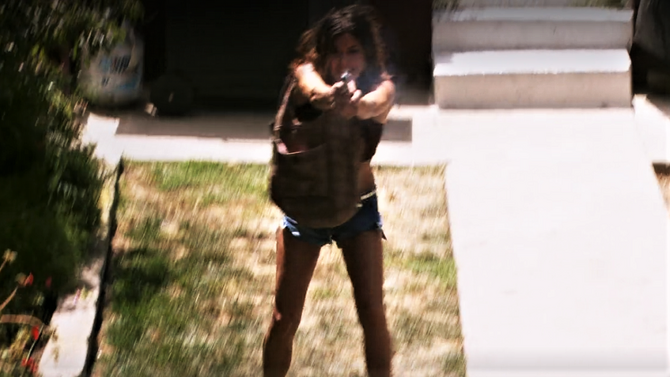 Nikki Wald: One of the Vacation Murderers

If I Had a Hammer

Two (as accomplice)
One (directly)

No method of disposal

Nikki Wald is a character in Season Four of the Showtime series DEXTER.

She and her boyfriend, Johnny Rose, were responsible for a series of robberies and two murders, thus dubbed the "Vacation Murderers." Nikki also killed Johnny.

Nikki is a young woman with long, brown wavy hair. She wears a sleeveless yellowish green top underneath an unzipped, pink long-sleeve jacket atop a set of short blue jeans with what appears to be brown shoes.

She is an unstable individual who can react violently, due in part to her meth addiction. This is apparent when she learns about Johnny's syphilis and multiple partners, and ends up killing him. After he's dead, Nikki hallucinates that she is still in the hotel with Johnny, and continues to angrily talk to his dead body.

Nikki first met Johnny Rose in high school and they began a shoplifting spree (before the fourth season). They were eventually caught and she testified against him for a reduced sentence. Later, Johnny and Nikki rekindled their romance and made a plan to rob people so they could buy a boat and sail off into the sunset. They tended to target tourists, thus earning them the nickname "The Vacation Robbers."

This series of robberies escalate to murder after one of their victims interrupts them and is incidentally shot in the head during a struggle. They begin to be referred to as the "Vacation Murderers."

They commit another murder with Johnny as the shooter, and steal everything they can carry. Later, Dexter identifies Johnny after he accidentally cuts himself on a cactus, leaving blood evidence.

Lieutenant Maria LaGuerta and Sergeant Angel Batista go to Nikki's apartment to question her. Nikki and Johnny are just arriving home and they open fire on the officers and take off in a gray sedan.

They are suspected of gunning down Frank Lundy and Detective Debra Morgan with Lundy dead and Morgan alive. Sergeant Batista takes advantage of a reporter, Christine Hill, by telling her about Johnny's syphilis and multiple partners in an attempt to cause a rift in their relationship. When Nikki sees the news article, she overreacts and ends up killing Johnny and hallucinating until she is tasered by Detective Joey Quinn in a back alley.

Nikki confesses to the Vacation robberies and murders, but denies shooting Debra and Lundy. Debra confronts Nikki in jail about the shooting, and threatens to say that she saw Nikki that night. After a long back-and-forth, Nikki convinces Debra that she had nothing to do with Lundy's murder. Nikki is most likely sent to prison and is never seen again.

Nikki with a gun, while high on meth