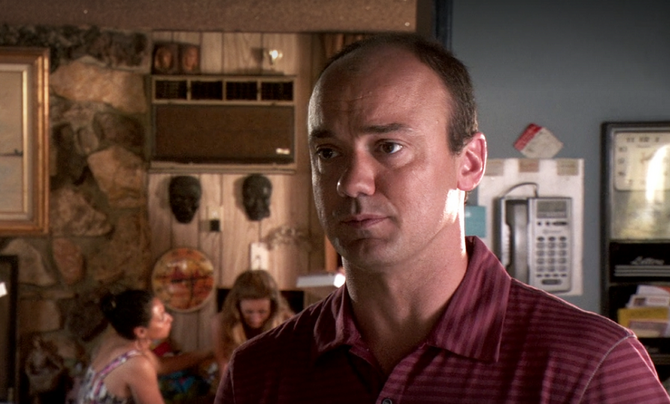 Nick Smith is a character in Season Four of the Showtime series DEXTER.

He is the father of the attempted Trinity Killer victim, Scott Smith.

While the nanny is with his two children at the arcade, his son is tricked and captured by Trinity. After Scott goes missing, the police launch an Amber Alert. Soon, the Smith house is filled with volunteers desperately trying to find Scott, including a visit from Dexter Morgan who takes some flyers.

Dexter finds Scott as he is being buried alive by Arthur and rescues him. However, saving Scott allows Arthur to escape.

Arthur is surprised when he notices on TV that Scott is alive and reunited with his family.

Nick sita by Scott's side as he is being interviewed by Debra Morgan. Scott recalls how his captor kidnapped and drugged him, and he draws a picture of the Four Walls One Heart logo. His statement allows the police to identify Trinity as Arthur Mitchell.

Scott after rescue with family on TV

Scott draws Four Walls One Heart logo
Add a photo to this gallery
Retrieved from "https://dexter.fandom.com/wiki/Nick_Smith?oldid=111164"
Community content is available under CC-BY-SA unless otherwise noted.