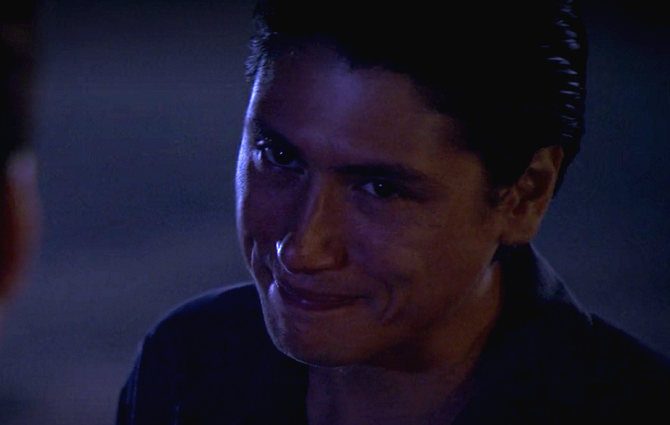 Nick: The Fork in the Road

Ex-con
Mechanic
Member of the Locos

He shot his victim three times and left him to die

Nick wanted to start a new life and enlisted Brother Sam's help in doing so, but Nick eventually changed his mind. When Nick tried to rejoin the Locos gang, they wouldn't accept him back unless he killed Brother Sam -- and he did.

Nick is a character in Season Six of the Showtime series DEXTER.

He was an ex-convict with a drug-addiction who worked as a mechanic in Brother Sam's body shop called Good Shepherd Auto Repair. He was associated with the gang known as the Locos.

Nick is a young Latino man with black spiky hair. He has a little bit of facial fuzz and wears a light-green sleeveless shirt with tan shorts and socks rolled all the way up his calves.

Nick was a young miscreant who found himself in trouble with the law. At some point, Nick joined the gang, Locos, headed by Julio Benes. As an ex-convict, he was taken in by Brother Sam to work at his body shop. Sam pressured Nick to give up drugs and his association with the gang. Unfortunately, Nick's desire to get high occasionally caused him to miss work, but Sam kept trying to help him. Nick began to feel that working for Sam was a waste of time and he took steps to rejoin the Locos.

Dexter Morgan begins his investigation of Brother Sam. He takes his car to Sam's body shop to be repaired after he purposely causes a minor accident, resulting in a damaged back bumper. He meets with Sam and waits for an estimate, while also learning a bit more about him. Suddenly, one of Sam's workers informs him that Nick hasn't shown up for work again and Sam tells the worker to call Nick and say that he's coming for him. Dexter wonders if Sam is going to cause trouble...and he decides to tail him.

Dexter follows Sam later that night to the house where Nick is staying. A gunshot is heard from inside and Sam leaves the house carrying Nick. He puts him in the trunk and Dexter needs to confirm if Sam just murdered Nick. Sam ends up back at the body shop, where Dexter, possessing a needle of M99, approaches from the front. However, Dexter is confronted by a barking guard dog, Eli, who alerts Sam of someone outside. Sam, while hesitant, allows Dexter to go inside to retrieve his garage door opener (a lie by Dexter to explain his presence).

Now in an improvised fashion, Dexter readies himself to take care of Sam. However, he is surprised to spot Nick alive, leaning against Dexter's car, smoking a cigarette. Sam tells Nick to get off the car, Nick asks why he was punched in the face and Sam says because he shot at him. Sam orders Nick to take Eli out back and it gives Dexter a chance to talk to Sam. They are shortly interrupted by the arrival of Julio Benes and his gang. Julio came looking for Nick, but Sam stands strong, even in the face of a gun. Dexter, fearing the situation could get brutal, pulls out his forensic ID, making the threat that, if either of them is killed, the department will be on them.

Julio, while he originally refuses to leave without Nick, decides to leave...but not without first warning Sam to not cross him. Later, Julio is dealt with by Dexter.

Nick and Brother Sam are still working together in the garage. Sam invites Dexter and Harrison to Nick's baptism, and Sam continues to watch over Nick to make sure he stays safe.

Dexter and Harrison attend Nick's baptism on the beach at Biscayne Bay. Later, Nick leaves the garage to attend a computer class, for which Sam is paying. Nick seems appreciative.

Brother Sam is shot by an intruder.

Nick attends a prayer meeting for Sam, which is held in hopes that he'll pull through. He stands next to Dexter there, and appears to be despondent. Hesitant at first, Nick eventually reveals to Dexter info about the gang and confirms that Leo Hernandez is the new shot caller.

Dexter tracks down Leo, only to see him gunned down by police in a shootout. Dexter finds a video of the shooting and notices that Eli stayed calm and didn't bark, the way he only acted around Sam and Nick. Dexter locates the bullet that Nick shot at Brother Sam when he was high, and it matches the three bullets shot in the auto garage.

Dexter meets with Sam at his deathbed and is told to put his darkness aside, embrace the light, and forgive Nick for both himself and Sam. Dexter finds this difficult. In an attempt to honor Sam's wishes, he takes Nick back to the beach where he was baptized. Dexter reveals that he knows Nick was the shooter. Nick nervously insists that he needed to shoot Sam to prove himself to the gang. When Dexter tells Nick that Sam forgives him, Nick insists on seeing Sam, only to hear that he passed away that night.

At first, Nick appears to be very upset at Sam's death, but he suddenly replaces this with an intense joy. This blatantly disrespects Sam's sacrifice for him and disgraces the fact that Dexter was about to chose light over darkness. Rage builds up inside of Dexter, forcing him to tackle Nick and drown him in offshore waters. Shortly after killing Nick, Dexter visualizes his brother, Brian Moser, standing there, clapping his hands -- and Dexter slightly smiles. Nick's body is cut up and is dumped into ocean the next morning.

Nick and Sam working together

Nick is baptized by Brother Sam

Dexter and Nick at prayer event

Nick shows his anger at Sam

Nick laughs at getting away with killing Sam