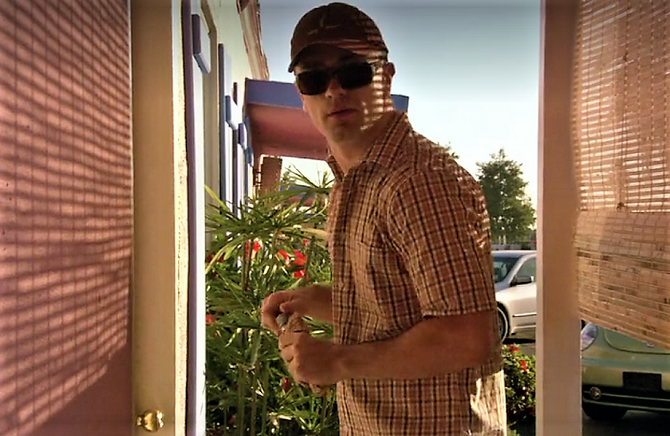 Neil Perry: Pretender to the Throne

Neil Perry is a character in Season One of the Showtime series DEXTER.

Neil is a brilliant but deeply disturbed computer analyst who collects and preserves dead animals. Neil was regularly abused by his mother but never struck back; only when she died of a heart attack did he finally lash out, mutilate her corpse, and bury it outside his mobile home.

Neil is interviewed at the station by Sgt. James Doakes and Debra Morgan after he supposedly saw a man on the grounds of the hospital where Tony Tucci was found.

When Doakes asks Neil if he was alone that night, Neil says, "Uh, it was just me and Caesar, my dog. He likes abandoned buildings. Caesar's a ratter." He looks through a book of suspects, but doesn't recognize anyone, only saying that the man wore a cap.

Neil changes the subject, asking, "Hey, is that KG-230 hooked into a digital CCTB network? Ooh, you better have a hell of a firewall. You get better resolution with the 440." This angers Doakes and he concludes the interview, after which Maria LaGuerta sends Neil home.

Neil sees the chance for fame and uses his skills to hack into the police database.

After discovering that Neil was near the Seven Seas Motel crime scene, Debra and Angel drive out to his home address, which is a dilapidated mobile home. They find a parked wood-paneled station wagon, which matches the description of the car that picked up Sheri Taylor before she was murdered. They observe a security camera watching them. Angel and Debra knock on the two doors but Neil escapes by crawling out the back door, bumping into a gnome on the way. He punctures their car’s tire, flees on foot, and speeds away in a different car.

Police arrive at Neil's home to search for evidence that he is the Ice Truck Killer. Angel orders everyone to follow "strict sterile protocol" to avoid contamination. Inside the mobile home, they discover computer files about dismemberment, dozens of taxidermy oddities, newspaper articles about the Ice Truck Killer, and photographs of corpses not released to the public. Outside, they unearth a human skeleton with amputated limbs. (It turns out to be Neil's mother.) This convinces Debra that they have identified the killer, but Dexter Morgan doesn't agree with her.

Neil's phone calls are traced to a red-light district, and Debra and Angel track Neil to a motel room. They discover a terrified hooker, bruised, gagged, and tied to a bed. When Neil returns to the room from a trip to a liquor store, Angel and Debra arrest him. He suddenly and bizarrely begins to sing a song.

During interrogation, Neil mentions details in the case that were withheld, and he's deemed to be the Ice Truck Killer.

While in jail awaiting trial, Dexter realizes Neil is a fraud when he fails to recognize him.

Due to Dexter's subtle manipulation, LaGuerta suspects that Neil is not the true killer.

Neil promises to give up information if he can be interviewed first by a reporter. LaGuerta then sends in a cop posing as a reporter, but Neil doesn't fall for it. After he reveals knowing how she was promoted, LaGuerta realizes that Neil obtained information from cracking the police database.

LaGuerta demonstrates that Neil doesn't have the nerve to be the Ice Truck Killer when she shows him a genuine severed head and asks for his "expert opinion." It horrifies him and he squeamishly begs her to take it away. LaGuerta tries to convince the Captain and District Attorney that Neil isn't the Ice Truck Killer but they still insist on going to trial..

The true Ice Truck Killer pours the collected blood of his victims inside a hotel room. The blood is matched to his drained victims' by DNA. It proves that Neil is not the Ice Truck Killer. LaGuerta undermines the Captain by publicly stating that Neil isn't the killer. Matthews is furious and it's the final straw that causes her to be demoted.

At the station, Debra tells Doakes that the Ice Truck murder charges are being dropped on Neil Perry. Doakes says that he will probably file a lawsuit.

Although he is not the Ice Truck Killer, Neil is assuredly in prison.

Neil at his first interview as a witness regarding Tony Tucci

Neil escapes by crawling out from his mobile home

Debra and Angel capture Neil in his motel room

A cop pretends to be a reporter

Maria LaGuerta and Neil face off 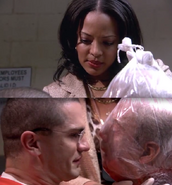 LaGuerta horrifies Neil into recanting his confession by showing him a severed head
Community content is available under CC-BY-SA unless otherwise noted.
Advertisement