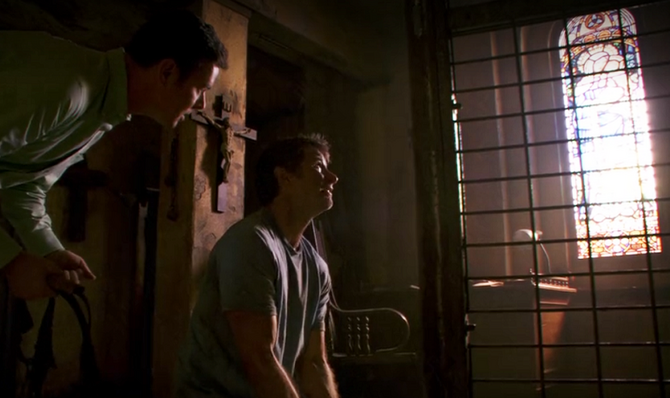 A Horse of a Different Color (Corpse)

Killed by Travis Marshall,
then dismembered by bone saw

Unknown
Nathan Roberts is a character in Season Six of the Showtime series DEXTER.

A jogger by night, he encounters Travis Marshall apparently injured on the path, only to be taken by surprise when he's assaulted with a rock. Nathan wakes up a prisoner in a church and later becomes the sacrifice in The Four Horsemen Tableau.

Nathan is a physically fit man in his 30s with short brown hair and blue eyes. He wears a blue T-shirt with tan shorts and tennis shoes. He is apparently quite strong since he is able to pull his chains loose from the floor of a church.

Nathan, a seemingly average guy, shows he is kind and trusting, as he stops to help an apparently injured Travis like a good Samaritan. As a prisoner, Nathan is paranoid and fearful for his life. He hopes that if he continues to do what Travis wants, he'll be set free. He begs for forgiveness of his sins, even prays to God for it, although it’s unknown if he is sincerely religious.

With patience and endurance, Nathan is able to pull his chains up from the floor. Having a chance to escape, he is quiet and careful about it. However, a horse alerts Travis and Nathan is recaptured. Terrified, Nathan begins to beg intensely for forgiveness, although it does not save him from being killed.

While Nathan is out jogging, he comes across a man on a pathway who is clutching his ankle. Nathan rushes over to him to offer assistance. The man (Travis Marshall) tells him that his ankle must be sprained. As Nathan bends over to look at it, his head is met with a rock and he's knocked out. He is taken to an old, abandoned church where he remains unconscious for a time.

Nathan wakes up chained to the floor of the church. As he pulls at his chains, Travis walks in and tells him that in order to be saved, he must beg for forgiveness. Nathan complies but he isn't believed at first; only upon the second visit does he get through to Travis. However, “Gellar” states that Nathan is just saying what Travis wants to hear and doesn't really mean it. Regardless, he claims that Nathan will come around.

With continued effort, Nathan is finally able to weaken the shackles on the floor and pull himself free. He quickly and stealthily attempts to escape after checking to see if Travis is present. The main chapel is apparently empty and he heads for the door. Unfortunately, a horse being kept inside the church rears up and startles him, forcing Nathan to fall on the floor. Suddenly, Travis appears and drags him back into the other room. Nathan cowers and crawls on the floor, begging for forgiveness at Travis’s feet. Travis looks on coldly as “Gellar” stands nearby, finally saying that Nathan is “ready.”

The following day, four horses with four odd riders canter through the streets of Miami. All four riders are composed of sections of mannequins with human parts attached. When Dexter Morgan arrives on scene, he remarks that this murder is reminiscent of the way in which his brother had killed, dismembered, and displayed his victims.

Investigation reveals that the body parts are from only one person, identified as Nathan Roberts. A piece of paper is later found in Nathan’s left eye with the numbers 1242, which Dexter connects to the number of days between deaths of The Doomsday Killer's victims.

Travis pretends to be injured

Unconscious Nathan brought to the church

Nathan tries to free himself

Nathan pulls on his chains

Heading for the door

Dexter is amazed by tableau

Scene of The Four Horsemen tableau