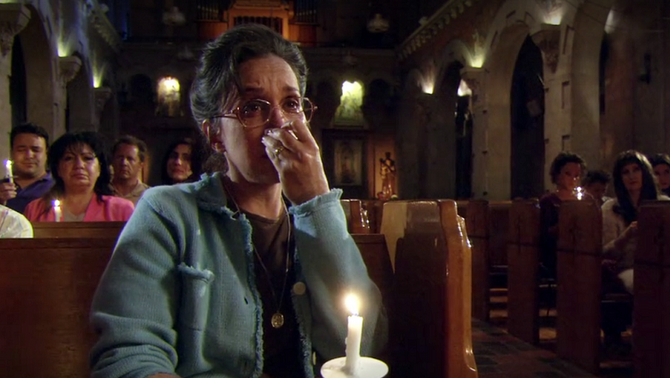 Mrs. Tucci is a character in Season One of Showtime's series DEXTER.

Before he disappeared, security footage showed Tony Tucci arranging body parts inside the Miami Blades Ice Hockey Stadium. Although Tony wasn't officially charged for the murder, Maria LaGuerta ordered a manhunt for Tony. This led the press to report that Tony might be The Ice Truck Killer. LaGuerta was soon forced to apologize to Mrs. Tucci when fingerprint analysis of a severed left hand proved that Tony was a victim, not the killer.

Soon, a right foot was found in an office park, previously a soccer field. While examining the foot, Dexter discovered that it had been amputated from a living person. LaGuerta called Mrs. Tucci to notify her that Tony may still be alive, and afterward met her at her church. Mrs. Tucci seemed less interested in Maria's apology and more interested in finding her son, dead or alive. She looked to Maria for hope, and gave her a necklace of St. Anthony, the patron saint of lost things.

Lastly, a section of Tony's right leg was found at the McCaffrey Pumpkin Patch. Mrs. Tucci was last seen at the abandoned Angel of Mercy Hospital, where her son was found alive, after being held captive there by the Ice Truck Killer.

Mrs. Tucci's son is found alive in the Angel of Mercy Hospital
Add a photo to this gallery
Retrieved from "https://dexter.fandom.com/wiki/Mrs._Tucci?oldid=103125"
Community content is available under CC-BY-SA unless otherwise noted.