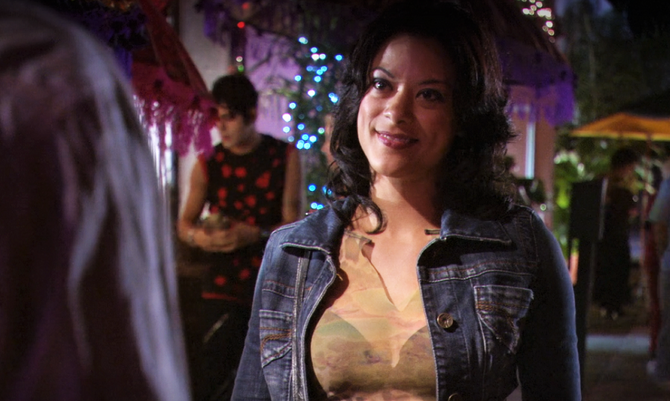 Monique is a character in Season One of Showtime's DEXTER.

She was a call girl who wore a prosthetic hand with multi-colored fingernails.

Monique was a young, attractive Latina woman with long black hair who wore a generous amount of makeup. She had an unique feature which was her prosthetic hand with each fingernail painted in a different color.

Monique was a woman with a fast-talking, yet considerate attitude. She claimed to have left her job as a prostitute, but later answered a call so it's likely she never left the position and only lied to the police to keep herself out of jail.

Her early life was a mystery and it was unknown how she lost her hand. At some point, she began to support herself financially by selling her body. A year before the Ice Truck Killer Case, she met with a trick who was, at first, very violent with her. Then, once he learned that she wore a prosthetic hand, he became much gentler. He asked her to remove it and seemed to worship the object. Monique had no way of knowing that he was Brian Moser aka The Ice Truck Killer.

While recovering from his divorce, Angel Batista visited a nightclub and noticed Monique dancing with another man. He recognized how the fingernails on her fake hand were painted just like those on the fingertips in ice left behind by the Ice Truck Killer.

Angel took Monique aside and she eventually explained that a John she had met got all rough with her until he saw the prosthetic hand, which turned him on. He then took it off and began treating it as if it were sacred, and painted all its nails with different colors. Monique liked what he did and so continued doing it. She described her trick as sexy despite being a freaky.

On Vince Masuka's advice, Angel talked to Rudy Cooper about any of his clients that may have had an amputee fetish, in order to bring him closer to catching the Ice Truck Killer. Rudy then stabbed Angel in a parking garage.

During a subsequent encounter with the same trick, he said that he had previously allowed her to live because of her "imperfection." In order to distract the police, he drained Monique's blood, dismembered her, wrapped up her body parts, and left them at a Christmas themed area. He added a video to the crime scene which showed Monique being murdered, while she begged for her life. Brian kept Monique's ring and later gave it to Debra Morgan when he proposed to her.

After Masuka found out that Monique was an amputee, the connection was made to the Ice Truck Killer and Batista's attacker. This led the police to Rudy, whom Angel later identified as Brian Moser.