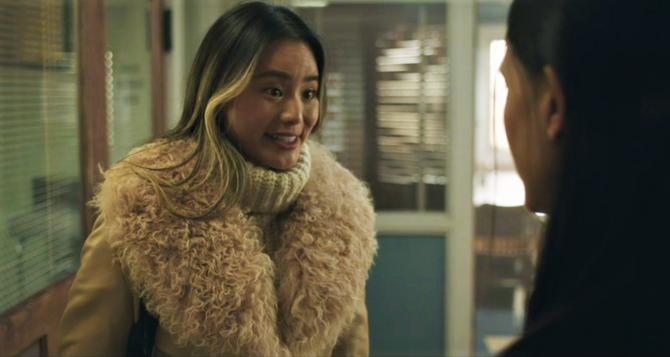 Sins of the Father (Corpse)

She is a famous true-crime podcaster from Los Angeles who arrives in Iron Lake, N.Y.

Molly approaches Angela to offer her help as a volunteer in the search for Matt. Angela presumes she's just a citizen who wants to help but later finds out from her daughter, Audrey, that Molly is a famous true crime podcaster.

Molly goes to the police station looking for Sergeant Logan and more importantly- Angela who has the information Molly wants. Angela comes out to tell Molly to go away but Molly explains that she slept with Sergeant Logan and stopped by to visit. Then she barrages Angela with questions about the case - claiming it’s odd no one can make contact with Matt but that he’s okay. Molly claims she herself has called several times. Angela tells her to go. Molly tells Logan to call her when he’s off.

Later on, Molly walks into Angela’s office with a peace offering. She pours herself a drink and then gives photos of Faith Darwas taken three days earlier in Tulsa. Molly explains that she asked her followers for help after seeing Angela’s missing women board. She explains that she goes by Lauren now and is just a runaway. Molly tells her that she got no hits on the other women she posted and asks Angela for her theory.

Angela tells Molly the story of Iris, her best friend in high school. Angela explains that everyone said Iris ran away but Angela didn’t believe that - it’s the reason she became a cop. Molly suggests an alliance between her and Angela. Angela agrees to take the help. Molly sets down a recorder and asks for every bit of information she has about these missing women.

Angela is fuming after learning from Sergeant Logan that Matt Caldwell is eating five-star room service in New York City while the town has been searching for him in the freezing cold. Molly is disappointed since it means no dead guy, no podcast. When Angela mentions driving to the city to confront Matt, Molly wants to go with her. Logan accuses her of only wanting to salvage her podcast. Angela says it's great timing because there is a missing persons conference that she wants to attend. The county won’t expense the trip, so Molly says she will. Molly, who has been sleeping with Logan, tells him that she met someone new online.

At the hotel, Angela takes a call from Logan as Molly asks the front desk clerk to confirm that Matt is staying there. The clerk is tightlipped, insisting that it's against protocol to give out any information regarding guests. Angela then walks up and shows him her badge. The clerk admits that Matt was a guest but he checked out the night before. Angela requests video footage to confirm that Matt was there. After some back and forth in which Angela threatens to fill the lobby with cops, the clerk agrees and tells them to come back later that night. Molly calls Angela a "badass."

As they’re looking for the conference room, Molly debates taking a nap, getting a massage, or using the Spa. She decides to attend the conference after finding a poor review on Yelp. Angel Batista is introduced as a speaker and he talks about the Bay Harbor Butcher Case. Molly tells Angela: "Oh, I did an episode on this once. They actually thought it was a cop in the same department. I mean, can you imagine? Being right next to a serial killer for, like, years and having no idea? I don't think so." A man, annoyed by Molly's talking, gives her a stern look and she tells him:  "It's called Merry Fucking Kill. Subscribe. Available on all platforms." When Angel mentions that connections among missing persons can lead to one perpetrator, Molly remarks, "Occam's razor. Sometimes the simplest explanation is the right one."

After the conference, the hotel clerk presents footage to Angela and Molly of "Matt Caldwell" checking out the night before at 11:30 p.m. However, Angela and Molly don't recognize the man. Angela plays it off by telling the clerk, "You're right. There he is. All checked out. Sorry to bother you with this, sir. Thanks so much for your time. Just, uh..." [She clicks a photo of the man with her phone.] "For my records. Thanks again." As the two confused women walk away, Molly asks, "Who the fuck was that?" Angela asks, "Why would Kurt lie?"

Molly talks to Angela about tricking Kurt and trying to interview him. Angela tells her to stay away from him for the time being.

Molly doesn't listen to Angela and sets up a lunch meeting with Kurt at the bar to confront him about lying. Kurt admits to Molly that Matt was never in New York City and that he lied about FaceTiming with him. Kurt tells her that Matt showed up drunk in person and Kurt wanted to cover for him. He tells Molly that Matt is hiding in his cabin. He offers for Molly to interview Matt to get his side of the story as long as she doesn’t tell anyone where the cabin is. She tells him he has a deal.

Molly goes with Kurt to the remote cabin. Kurt knocks on the door and calls for Matt. Molly starts to get creeped out and Dexter walks into the door to check on them. Molly tells Dexter that Matt is in there and Jim tells him he’d love to say hi. He pushes open the door and notes that the door only locks from the outside. He also sees the camera. He wonders if Kurt is the killer that Angela is looking for. The room is empty and Matt isn’t inside. Dexter offers to give Molly a ride back. Kurt tells them the thing about Matt stays between the three of them. Kurt punches a hole in the wall.

Molly opens up to Jim (Dexter) that she was starting to feel creeped out back there and is grateful he showed up. She was worried she would become an episode in her own podcast.

Molly rushes into Angela’s office, thrilled that they caught Kurt, and asks why Angela didn’t text her. Angela tells Molly they’re done because Molly withheld the information about the cabin.

Later on, Molly meets Angela to talk to her as a friend. Angela opens up about how she was supposed to go with Iris that day she went missing. Angela admits that Jim (Dexter) followed Molly that day but Molly seems surprised because Dexter wasn’t sitting anywhere near Molly and Kurt. Molly suspects Jim was recording them.

When Molly exits the tavern after meeting with Angela, Kurt is across the street, watching her from his truck.

While investigating Dexter, Angela listens to Molly's podcast episode on the Bay Harbor Butcher. She tries to call Molly but gets no response.

Later, Dexter and Harrison discover a bunker on Kurt's property and break into it. As they turn on the lights, dozens of deceased embalmed women are seen along the walls, stylized as trophy cases. As the two continue down the hall, they discover one of the 'trophies' to be Molly, revealing that she was kidnapped and killed by Kurt at some point during her disappearance.

Angela visits the inn Molly was staying at, where the clerk states she had checked out at some point and her luggage was gone. She has the safe opened, where Molly's expensive equipment remained. Angela believes Molly would never leave the equipment behind.

With Dexter's help, Angela finds Kurt's bunker and recognizes several of the dead women, including Molly. 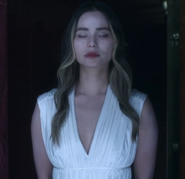