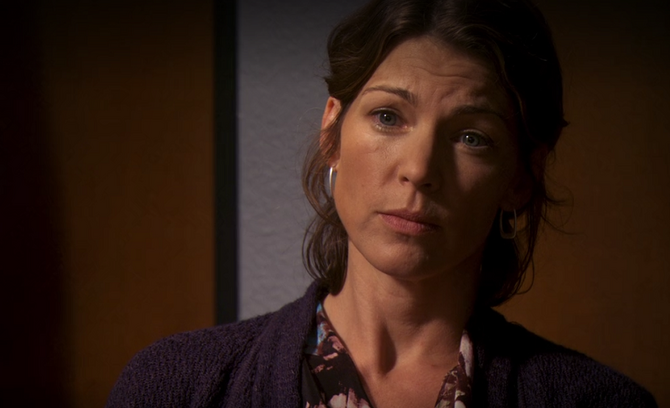 Michelle Ross is a character in Season Six of Showtime's series DEXTER.

She is a psychiatrist employed by the Miami Metro Police Department who offers therapy to their employees. Following an officer-involved shooting, she is personally assigned to Lieutenant Debra Morgan.

Michelle Ross is a woman in her early 40s with mid-length, curly brown hair and a kind, understanding expression. She has bright blue eyes and often wears reading glasses, although she removes them when listening intently to her patient. She always wears professional business attire.

Michelle is an open-minded individual who knows how to ask the right questions in a supportive manner She ultimately breaks through Debra's protective barrier regarding her feelings and learns a great deal about her history.

Besides having to deal with the aftermath of the shooting, Debra has the added stress of following the Doomsday Killer Case and being unable to save Erin Baer's life, as well as the emotional turmoil between herself and Joey Quinn. Even her brother, Dexter Morgan, is "further away" from her than she could ever have imagined. Debra rarely speaks to him on a personal level and she is constantly surprised by his actions.

At first, Debra avoids meeting with a therapist, but she is confronted when Michelle Ross shows up in her office. Over time, Debra reluctantly opens up about her inner feelings about her job and family history.

As the sessions progress, more focus is put onto Debra's dependency on Dexter and her failed relationships with others. Michelle's questions begin to ignite the thought in Debra that she is in love with Dexter, which may be at the root of her problems. Initially, Debra denies this and grows angry at Michelle, but she begins to think it is true.

Debra enters a church where Dexter is supposedly collecting forensic evidence. She is there to reveal her feelings toward him, but she witnesses him killing Travis Marshall. This bewilders her, and Dexter's explanation that it was an impulsive act doesn't satisfy her. She searches Dexter's apartment, and finds his blood slides and kill tools. When she confronts him, Dexter is forced to admit that he is a serial killer. This knowledge places a huge amount of additional stress on Debra.

In the course of therapy, Michelle discovers a fact known only by Debra, Dexter, and Thomas Matthews. She becomes one of four living characters who are aware that The Ice Truck Killer and Dexter are biological brothers. Later, in Season Seven, Maria LaGuerta learns of this, also. 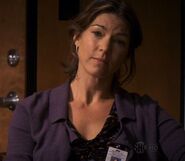 Add a photo to this gallery
Retrieved from "https://dexter.fandom.com/wiki/Michelle_Ross?oldid=101068"
Community content is available under CC-BY-SA unless otherwise noted.