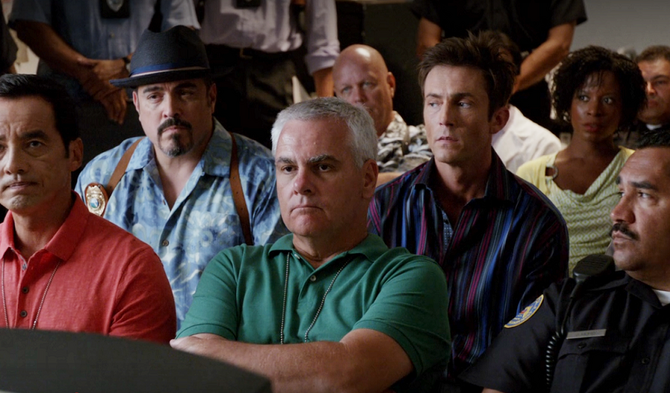 Detective Michael Soderquist is a character in the Showtime series DEXTER.

Soderquist has gray hair and is highly visible in his signature "ice cream" colored polo shirts. Although most of the time he has a serious expression on his face, he occasionally laughs with his co-workers.

Soderquist first appears sitting at one of the Detective desks while Debra is telling her brother about Sean the Mechanic. He appears later during a conversation between Maria LaGuerta and Angel Batista.

Present prior to the "bucking bronco" conversation initiated by Vince Masuka and Angel Batista and again after the Tony Tucci briefing helmed by James Doakes.

Witnessed moving passed offices at various points within the episode, as well as a prominent shot of him moving passed James Doakes on his way to the kitchen where he encounters Detective McNamara.

He mostly acts in the background, following orders to investigate crime scenes and is around in times of emotional turmoil for the department, such as when Angel Batista was attacked by the Ice Truck Killer.

Dexter creates a list of who he is inviting to his wedding. He considers the detectives Soderquist and Robert Ramos, but Dexter doesn't remember the former's name. Once Angel Batista orders them both to keep surveillance on Anton Briggs, Dexter says the following, "THAT'S his name... Soderquist."

He is present when Vince Masuka stands up to Lieutenant Ramon Prado of the Sheriff's department regarding the Skinner Case.

He attends Dexter and Rita's wedding, and smokes a cigar with Joey Quinn and several other detectives. 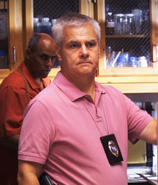 Soderquist on the left focused on work while Debra, Dexter and Batista talk (Episode 102:Crocodile)

Present in the background during a conversation between Batista and LaGuerta, heading off screen (Episode 102:Crocodile)

Appearing quite briefly between Masuka and Dexter before disappearing off-screen (Episode 103:Popping Cherry)

Soderquist to the right of Batista before taking a seat behind the three (Episode 103: Popping Cherry)

Soderquist outside the window during a meeting between Matthews and LaGuerta (Episode 104: Let's Give the Boy A Hand)

Soderquist arriving at a desk as Doakes walks by (Episode 104: Let's Give the Boy A Hand)

The same scene from a different angle but his suit jacket is already off within a fraction of a second (Episode 104: Let's Give the Boy A Hand)