Six Feet Under: Hall's work in the first season of Six Feet Under (TV series) was recognized by a 2002 Emmy nomination for an Outstanding Lead Actor in a Drama Series and 2002 American Film Institute Award nomination for Actor of the Year. In addition, he shared in the Screen Actors Guild nomination for best ensemble cast all five years that the show was in production, winning the award in 2003 and 2004.

In a 2006 interview, Hall discussed his approach to the character of Dexter Morgan, saying:

"I think Dexter is a man who... a part of himself is very much frozen, or arrested in a place that is pre-memory, pre-conscious, pre-verbal. Something very traumatic happened to him, he doesn’t know what that is. And I think on some level he wants to know. He denies his humanity, he describes himself as someone who is without feeling, and yet I think that he maybe suspects -- in a way that maybe isn’t even conscious yet when we first meet him -- that he is in fact a human being. Dexter's a unique killer in that his father saw his dark impulses, shined a light on them, and told Dexter that he saw them, he accepted them, that Dexter is good and that he is worthy of love. And I think that's what enables him to focus his energies in this unique way." [1]

Hall's acting career began in the theater. Off-Broadway, he appeared in Macbeth and Cymbeline at the New York Shakespeare Festival, and in Timon of Athens and Henry V at the New York Public Theater, The English Teachers at the Manhattan Class Company (MCC), and the controversial play Corpus Christi at the Manhattan Theatre Club. In 1999, director Sam Mendes cast Hall as the flamboyant Emcee in the revival of Cabaret, his first Broadway role. Hall also toured as Billy Flynn in the musical Chicago. In 2005, he returned to Off-Broadway theatre in the premier of Noah Haidle's Mr. Marmalade, playing the title character, an emotionally disturbed little girl's imaginary friend. Hall returned to Broadway in a big way in 2014, first as John Jones in The Realistic Joneses and later playing the title role for Hedwig and The Angry Inch. Between 2015 and 2016, Hall continued on stage, starring in David Bowie's New York Theatre Workshop play Lazarus, as Thomas Newton and continued his role months later in the London production.

His TV movies include Mysteries of the Freemasons (2006 documentary, Narrator).

TV Documentaries (as Himself)

He has appeared in shorts as himself in Jerry Stahl Rides Dirty with Ben Stiller, Jason Schwartzman, Michael C. Hall & Flea (2013); Literary Death Match (2012); and Light the Night Walk PSA (2011).

His TV credits include roles on Safe; The Crown; Star vs. the Forces of Evil (voice); Justice League: Gods and Monsters Chronicles (voice); Ruth & Erica; CollegeHumor Originals; and Six Feet Under.

TV Award Shows (as Himself)

Hall has sung for the band Princess Goes to the Butterfly Museum since 2018, alongside Matt Katz-Bohen and Peter Yanowitz. On 3 September 2019, they filmed their first music video for their song, "Ketamine," in Tarrytown, New York. The audio for the song was released 25 October 2019, with the official music video premiering on Collider 12 December 2019. The band's eponymous debut EP was released on 2 April 2020

Born in Raleigh, North Carolina, Hall grew up an only child, a sister having died in infancy before his birth. When he was 11, his father died of cancer, and in a 2004 interview he recalled, "Certainly, for a young boy, there's no good age, but I think I was on the cusp of a time in my life where I was starting to reach puberty, to relate to my father. To have him... Something gets frozen. As you revisit it for the rest of your life, it's sort of this slow but hopefully sure crawling-out of that frozen moment." [2]

In 2002, he married actress Amy Spanger; he played Billy Flynn opposite her Roxie Hart in the Broadway musical Chicago the summer after their wedding. The couple separated and divorced in 2006. On 31 December 2008, he married Jennifer Carpenter, who played the character of Dexter Morgan's foster sister, Debra Morgan. They dated for a year and a half before eloping on New Year's Eve in 2008. And then in the summer of 2010, Jennifer petitioned for divorce citing irreconcilable differences. The marriage was officially over that December. In September 2012, Hall began dating Morgan Macgregor who was an associate editor at the Los Angeles Review of Books, and they married on 29 February 2016. They live in the Upper West Side of Manhattan in New York City.

In a 2018 interview with the Daily Beast, Hall stated, "I think there's a spectrum. I am on it. I'm heterosexual, but if there was a percentage, I would say I was not all the way heterosexual." Despite this, Hall says he's never been attracted to another man. However, he stated he sometimes desires emotional connections with other men that he feels would be considered gay.

On 13 January 2010, his agent and spokesman confirmed that Hall was undergoing treatment for a treatable form of Hodgkin's lymphoma. Hall received his diagnosis while Season Four was still being shot, and he kept it a secret until shooting wrapped, beginning his treatment the next day. Many cast mates and friends made their concerns known to the media, some admitting they had no idea Hall was battling cancer because he never showed any signs of the disease. Hall expressed anxiety, mostly because he had avoided doctors since a childhood hernia operation. Hall accepted his Golden Globe and Screen Actors Guild Award in 2010 while wearing a knitted cap over his bald head, having lost his hair to chemotherapy. On 25 April 2010, his wife, Jennifer Carpenter, announced that Hall was fully cured and was set to get back to work for a new season of Dexter. During Season Five of Dexter, Hall wore a human hair wig due to his loss of hair. The cancer is currently in remission.

Hall is the face of the Somalia Aid Society's Feed The People campaign. He has also worked with Kiehl's to promote a limited-edition skin care line that benefits the Waterkeeper Alliance, an environmental nonprofit that works toward clean and safe water worldwide. In 2011, Hall was the celebrity spokesperson for the Leukemia & Lymphoma Society's "Light the Night Walk" fundraising campaign. 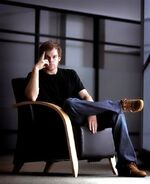 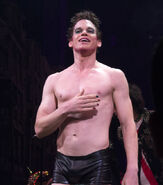 Michael C. Hall in Hedwig and the Angry Inch