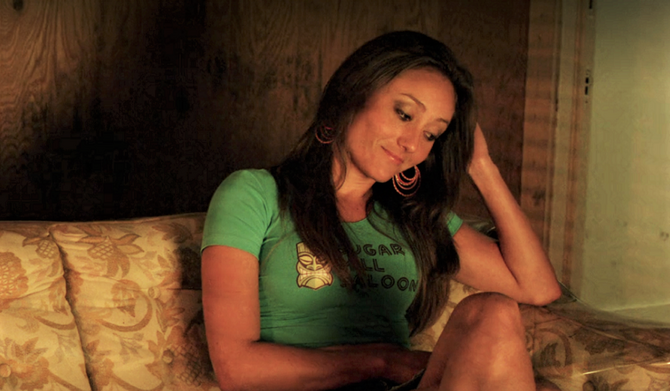 Melanie Garrett is a character in Season Seven of the Showtime series DEXTER.

She was a single woman who was murdered by Ray Speltzer.

Melanie worked at a bar that Ray frequented. One night, while serving him drinks, they began to flirt back and forth, and Ray invited her over to his place. She got off work early and took Ray up on his offer.

After arriving at his house, Melanie began to feel uneasy due to his sofa being covered in plastic and his odd behavior. When Ray said that he wanted a challenge, and that she looked strong, Melanie realized she could be in danger. Suddenly, Ray attacked her and dragged her into his self-constructed "Minotaur Maze." He turned on loud music to mask her screams and began to chase her through the maze. Ray soon caught Melanie and beat her to death. He then ripped off one of her earrings as a trophy.

Lieutenant Debra Morgan, who was outside Ray's house, heard the commotion and tried to save Melanie. However, she was too late and was herself captured by Ray. Debra would have also been killed, but for the interference of Dexter Morgan. Unfortunately, Ray escaped.

She is not shown, but her funeral is held.

Melanie and Ray flirt in the bar

Melanie waits for a move from Ray

Ray before he attacks Melanie
Community content is available under CC-BY-SA unless otherwise noted.
Advertisement