Maxwell Huckabee is an American actor.

He played the three-year-old Dexter Morgan, or the "boy in the blood".

Huckabee took his first role as an actor in 2006, on Alias during its fifth season in the penultimate episode, Reprisal. He also appeared on CSI: Crime Scene Investigation in the same year. He later appeared on Mad Men in 2007 as the young Robert Draper. He appeared on Bones in 2008, in the pilot episode of The Deep End and also on Pretty Little 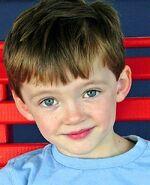