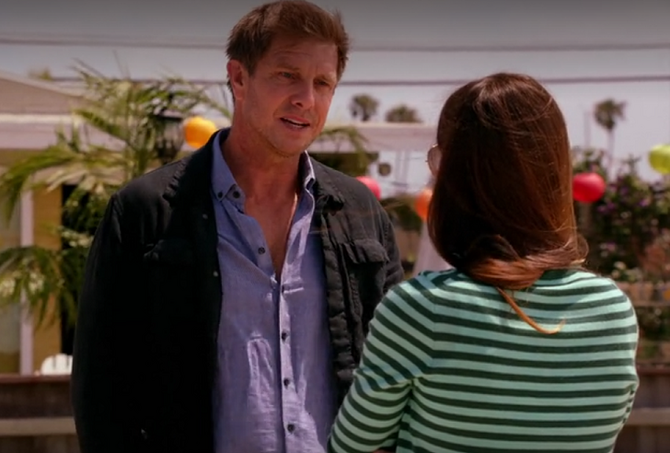 Stabbed in the chest by Oliver Saxon.

He was a U.S. Federal Marshal who was informed by private Investigator Jacob Elway that Hannah McKay was back in Miami, going under the alias "Maggie Castner" (based on what Debra Morgan had told him).

Looking to collect the reward money for Hannah McKay, Jacob Elway notifies the U.S. Marshal’s Service that she is back in Miami. Deputy Marshal Max Clayton meets with Elway at Elway Investigations to learn what he knows. Elway shows Clayton the passport photos of Hannah and her alias, Maggie Castner, and he agrees they look almost identical. Elway says her boat left for Saint Kitts yesterday, but he doubts she was on it. He also tells Clayton that Hannah’s husband is supposedly in New York City, but there is no record of him landing or even taking off. Clayton takes the information and is about to leave when Elway says he’d like to be on the team. Clayton chuckles and says he can’t, but assures him that if he finds Hannah, Elway will get his reward money.

Angel Batista introduces Deputy Clayton to Dexter and says there is a tip that Hannah is in Miami. Dexter acts shocked and denies having talked to her since their not-so-smooth breakup when he turned her in. Clayton warns Dexter that he may be a target, but Dexter tells him that Hannah is too smart to return to Miami. Dexter asks how he intends to find Hannah, and Clayton answers that her photo is going out on local media. Clayton hands his card to Dexter, and asks him to call if he hears from Hannah. Dexter readily agrees, remarking that he wants her behind bars as much as he does.

As soon as Angel and Clayton leave, Dexter phones Hannah to alert her about the marshal, telling her to stay put. He then drives her to Arlene Schram’s house to pick up her money. Soon after they arrive, Clayton shows up and Hannah hides herself. Clayton is surprised to see Dexter at Arlene’s house and asks what the hell he’s doing there. Dexter plays it off that he is Arlene’s boyfriend and wanted to warn her about Hannah. As he is leaving, Clayton sarcastically tells Dexter that he "sure knows how to pick ‘em."

One morning, Clayton turns up at Dexter’s apartment. He looks around, noticing Jamie Batista and Harrison. Clayton tells Dexter he is just checking in, and says the “Hannah threat” seems to have died down. He bends down to talk to Harrison, who is coloring pictures of a family. When Clayton asks who the pretty blonde woman is, Dexter hopes he doesn’t say Hannah. After a moment, Harrison replies, “That’s my mom,” to Dexter’s relief.

While Debra is working in her office, she is suddenly confronted by Elway on why she never told him that Hannah used to date Dexter. He also expresses suspicion about her failed trip the the Keys and asks if Hannah was really there. When Debra gives flimsy excuses, and defends protecting her brother, Elway grows angry at losing the $250,000 reward money. He asks Debra why she’s even working for him, and states that he could use the office space for someone who gives a shit.

Clayton tells Angel that none of the leads on Hannah panned out and the case is back to low priority. While they’re talking, Angel lets it leak that Dexter is quitting his job and will travel with his son. It hits Clayton that the reason Dexter is leaving at the same time Hannah is rumored to be in Miami is because they are back together.

While Debra is playing with Harrison outside her beach house, Clayton walks across the sand toward them. He introduces himself to Debra, saying that Elway gave him her address so he can privately talk with her. Clayton voices his suspicions to Debra about Dexter reuniting with Hannah, but she immediately dismisses them. Clayton says that Dexter may be keeping his relationship secret from her because men do stupid things for beautiful women, and logic flies out the window. Debra again denies that Dexter and Hannah are in contact, stating that he is only quitting because he is burned out. Clayton thanks her and gives her his card. As soon as he leaves, Debra hurries into the beach house to let Hannah know what just happened.

Later, Hannah is watches Harrison and he hurts himself while playing on Debra's treadmill. Hannah is forced to take him to urgent care, and signs him in as her son under Debra’s name. A receptionist recognizes Hannah from the news and afterward notifies authorities. When Clayton sees the name 'Debra Morgan' written on the waiting list, he is convinces that Debra is harboring Hannah.

Clayton questions Debra at the station on her first day back. He brings up the blonde woman named Debra Morgan who took Harrison to urgent care. Debra tells Clayton that Harrison has been staying with her since Dexter put his condo on he market and she took him to urgent care. Debra claims that the receptionist is mistaken that it was Hannah. Clayton still acts suspicious, but thanks her for her help.

Elway tells Clayton that Debra wouldn’t help Hannah, with he replies that she would do anything for her brother. Clayton tells Elway to visit Debra and look around. Elway is initially resistant because he and Debra didn’t part on good terms. However, he goes to her beach house under the ruse of returning a few of her personal items. When Debra opens the door, Elway barges in, where he notices extra plates on the table and an expensive handbag and high-priced shoes. Annoyed, Debra orders him to get the fuck out. She quickly tells Hannah they are on to her and the deputy marshal will soon be there. After Hannah calls Dexter, Debra takes her to a hotel.

While Debra is having a last dinner with Dexter in his apartment, Elway and Clayton search her beach house, at first finding nothing. Then Elway discovers that someone researched flights at the airport. He begins to access the manifests for flights in order to cross-check the names with passport photos. Clayton doesn’t think it’s legal, but he doesn’t interfere. Clayton then takes off to tail Debra.

When Debra is called by Dexter to The Treatment Room where Oliver Saxon is being held captive by him, she is followed by Clayton. While Debra is saying goodbye to Dexter, Clayton enters the old hospital and finds Saxon bound and gagged. In the pretense of an innocent victim, Saxon implores Clayton to free him, and then stabs him in the chest with one of Dexter's knives. Saxon then grabs Clayton's gun and, as Debra walks in to arrest him, he shoots her in the gut. She fires at Saxon as he escapes, maiming his arm.