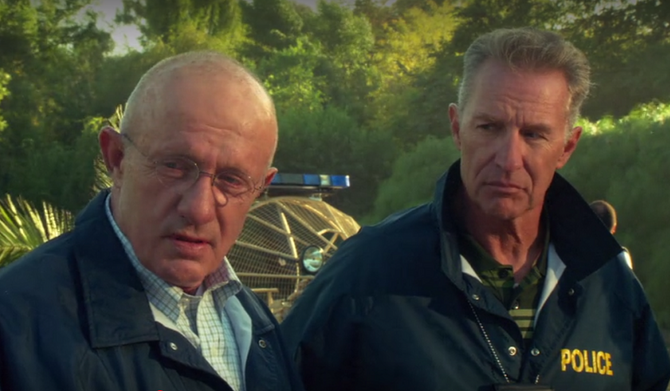 Max Adams is a character in Season Two of the Showtime series DEXTER.

Debra Morgan and Frank Lundy are together getting ready for work when they both receive cell phone calls. Lundy reads his text message first which says they are being ordered to work. Deb then reads her message and, looking puzzled, asks, “Who’s D.D Adam?” Lundy answers, “My boss.”

In the homicide department, the set of knives that Dexter tossed in the water off the dock have been retrieved and are the center of attention. Thomas Matthews introduces FBI Deputy Director Max Adams who just arrived from Washington, D.C. to help with the investigation. Lundy greets Adams with “Max” and Adams replies with, “Frank” as he gives Lundy a disapproving glance. Matthews tells the team that he pledged their full cooperation and resources to Adams.

Adams begins speaking about the knife set, saying that a scuba diver class found them the day before and contacted the FBI directly, hence his involvement in the case. He informs the team that fingerprint analysis ties the knives to James Doakes and the fact that he discarded them means he is on the run. When Lundy asks Adams why he wasn’t brought in on this, Adams answers sarcastically, “You just were, Frank.” Angel Batista whispers to Deb that Lundy better watch his back. Adams then shows footage of Doakes at a gas station from four days ago that was taken off Highway 41, southeast of Naples. Vince Masuka quietly makes a crack to Dexter Morgan about the price of gas. Adams says they (referring to Lundy) let the target get away once and they can’t drop the ball again. Adams continues to talk in the background about the terrain of Florida as Dexter ponders what will happen if Doakes is arrested -- years of trials and appeals with Doakes pointing his finger and calling him killer.

At one point, Deb asks Lundy to access the FBI files and do a search on Lila Tournay, which he does. She asks if Adams will be pissed that he used the files for this, and Lundy says, "I certainly hope so."

Later, as Deb and Lundy are discussing Lila, Adams briskly approaches them, stating, “We got him!” He had talked to a park service manager in the Everglades who had given Doakes directions five days ago. Lundy counters with, “So you have a tip - not Doakes.” Adams, annoyed by Lundy’s remark, goes on to say that Doakes was headed into the Everglades, 15 miles north of Sunday Bay, and they will have the “son of a bitch” in handcuffs within 24 hours. Lundy urges caution in apprehending Doakes because new evidence (found by Lt. Maria LaGuerta) has come into play that could exonerate Doakes. Adams doesn’t take this seriously and tells Lundy to "show a little guts." Debra intercedes on Lundy's behalf, telling Adams to show respect, but Adams simply scoffs at her and walks away.

The burned body of James Doakes is found in the area of the Cabin in the Everglades, along with with a chopped up body nearby. Adams closes the case and returns to Washington, D.C.

Adams may have been politically motivated and used the case to further his own career.

Adams at cabin crime scene
Add a photo to this gallery
Retrieved from "https://dexter.fandom.com/wiki/Max_Adams?oldid=104588"
Community content is available under CC-BY-SA unless otherwise noted.