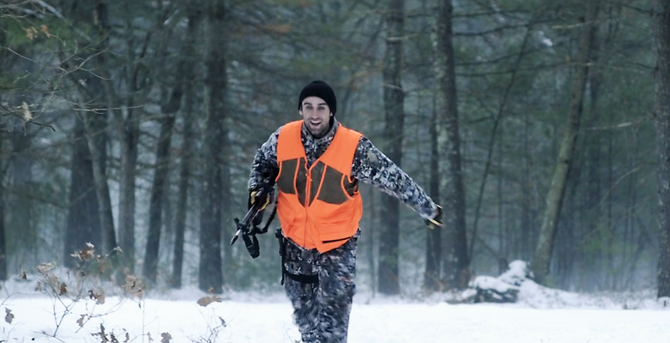 Caldwell the Lesser by Esther

Stabbed in the chest by Dexter Morgan/New Blood

He's the annoying entitled son of Kurt Caldwell, a local mover and shaker. Matt is the first person that Dexter Morgan kills after a nearly ten year hiatus.

Dexter (as Jim Lindsay) opens up Fred's Fish & Game shop where he’s worked for the past two years. The first customers through the door are two young men, soon identified as Matt Caldwell and Bill Harris.

Immediately, Matt walks over to the counter. He reads Jim's name tag and Dexter asks if he can help him. Matt states that he "just rolled into town with his posse" and is going to do a little hunting and he needs a new knife and a "big-ass gun." When Dexter shows him the knives, Matt picks out the largest one and slashes the air in front of Dexter, who backs away with “Hey! Easy there!” Matt laughs and asks, "Is there a problem?" When Dexter says that he has "kind of a thing about blood," Matt laughs again, mocking him with "Oh, Ooh!"

Matt directs his attention to the rifles and Dexter recommends one. However, Matt whispers that his friend Bill already has that one, and he wants a gun that's going to make his gun "look like a Super Soaker." Matt then points to a large gun prominently displayed on the wall, and Dexter says it costs $9,000. Matt brags that he got a "nice Christmas bonus at Morgan Stanley." Dexter, though, is reluctant to sell him the rifle and remarks that it has more firepower than he needs to hunt in the area. Matt sarcastically asks "Jim" if he hunts and Dexter says he hasn't killed any animals since he was a teenager.

When Dexter asks Matt for his ID for a federal background check, Matt thinks it's ridiculous. He points to a photo on the wall of when he was on Fred Senior's Little League team when he was six, adding that his father bought him his first rifle in the store when he was ten. The computer beeps, showing a 24-hour hold while the FBI checks Matt's record. Matt pressures Dexter to sell him the rifle anyway, but Dexter holds firm. After a brief stare down, Matt swears and buys the knife. He then creeps up on Bill in another part of the store and holds the knife to his throat. Matt laughs at Bill's startled reaction and they leave to go drinking. Dexter thanks them for shopping at Fred's Fish & Game.

While Dexter is alone at the table, Matt comes over and invites him to a party at his dad's house the next day. Dexter says dismissively, "I’ll see." Matt suggests that they leave the tavern so "Jim" can open up the shop and give him the gun so he can hunt in the morning. However, Dexter says he must wait until his background clears, but "his buds will be really impressed with the size of his gun." He gives Matt a smug smile as Matt angerly glares at him. Abruptly, Matt breaks into laughter and calls Dexter an "Eagle Scout." He advises "Jim" to come to his party anyway to have a good time, but not to bring his cop girlfriend because there will be a lot of "red flags" there.

The next day, Fred Jr. tells Dexter to sell the gun to Matt because the background check cleared and his dad is a friend of the store. He asks Dexter to deliver the gun and, reluctantly, Dexter agrees. A party is happening at Matt's house. His friend, Bill, greets Dexter and brings him upstairs to get a signature for the gun. Matt is having sex with someone in a bedroom and Bill tells him to wait.

Bill is upset when he learns that Matt is having sex with Becka, the girl he brought to the party. He snorts coke and opens up to Dexter about the boat accident, revealing that Matt deliberately rammed another boat and five people died. Bill admits he covered for Matt at the trial, though Matt was really culpable for what happened that day. Bill says he's receiving two grand a week to keep quiet. Matt finally walks out and signs the paperwork to get the gun. As a prank, Matt points the gun at Dexter and Dexter imagines slamming Matt's face with it.

Later on, Matt goes hunting and shoots the white buck that Dexter has seen around the forest and its blood sprays over Dexter’s face. Dexter impulsively hits Matt over the head with his rifle. He takes Matt’s knife but resists using it, thinking, “It’s been a long time.” He cuts the buck’s neck so its blood will cover Matt's blood. Dexter wipes the knife and returns it to Matt’s pants.

Back at home, Dexter hangs up plastic in the shed and lays Matt on a kill table, still alive. Dexter apologizes for the mess because he’s out of practice. Dexter takes a blood slide and orders Matt to own the bad things he’s done. If not, he’ll kill him. Matt asks if he's a serial killer and Dexter says that he used to be - then he corrects himself, “I am." This terrifies Matt and he admits to his wrongdoings on the boat. In his defense, Matt screams, “It’s not my fault” and blames it on a shitty childhood. When Dexter mentions his early life, Matt asks, "So you're not gonna kill me!" Calmly, Dexter says, "We're past the point of no return on that one. " Matt angrily warns Dexter that his father will find out and destroy him. Dexter answers, "Like you said... life is short... dude." He stabs Matt in the chest, stating, "Hello, Dexter Morgan." He then dismembers and conceals Matt's body, disposing of the blood slide as he decides he's moved past the point where he needs a trophy.

Matt's dismembered body, his rifle and knife are revealed to be hidden under the stones of Dexter's firepit.

Dexter realizes he needs to move Matt's body to throw the police tracker dogs off the scent. He spends the entire night dragging Matt's hunting jersey through the forest to leave a scent that leads to the motorway.

Later, Dexter attempts to move the body to an abandoned iron mine, but abandons the idea after encountering a very angry bear. He eventually burns Matt's remains in a local sanitation incinerator.

Matt asks "Jim" if he hunts

Hold on Matt's purchase due to background check

Matt tries to persuade "Jim" to just give him the gun

Dexter sets up kill room in his tool shed

Dexter angry that Matt shot the deer and almost shot him