Mark Pellegrino (born 9 April 1965) is an American actor and producer.

Mark plays the enigmatic Jacob on the hit ABC series Lost, initially shown as a shadowed character before finally being revealed in the later seasons. He plays one of the Island's original inhabitants, with a mysterious truth about him and another man only known as "MIB (Man In Black)".

Mark pulls off a brilliant performance as a relaxed but gentle man with a fascination with humanity and a hope for their correct choices. As such, he can be seen as a very wise and understanding character and ultimately plays a major part in the explanation behind the Island.

Mark plays the Boston Vampire leader James Bishop on the hit Syfy series Being Human. Bishop is a Vampire over 500 years old and a powerful influence over the Boston vampires with his own ambitions of both power and the direction in which all other Vampires should take. He is also the maker of Aidan McCollin, his most beloved "child" who tried to change his own ways as a vampire by turning to a more "vegetarian" lifestyle.

Mark's role as Bishop is powerful and threatening, he portrays the vampire as someone not to trifle with and at the same time is essential to keeping the order in leading and protecting the Vampires under his command. His ambitions make him dangerous and his intelligence makes him formidable, however his fate always intertwines with the vampire he made Aidan.

Of interest, Sam Witwer (who plays Neil Perry in Season One of DEXTER) is the actor who portrays Aidan. The two actors, however, never interact with one another in DEXTER.

Mark plays the character Nick (who is the vessel for Lucifer) in the hit series Supernatural, based on the biblical character Satan (also often named "Lucifer"). He originally appears as a troubled man who lost his wife and child to a deranged killer. Lucifer appears to him in Season Five offering a solution to his misery by making him his vessel (angels and demons must possess a human being as they don't have a physical form that can be shown to normal human eyes and in the case of angels, the humans must give them their consent before they can possess them). Feeling he can get justice, Nick allows Lucifer inside... and the character Mark plays changes to a sinister yet scorned portrayal of a fallen angel who feels that he was betrayed by his God and his older brother Michael and so seeks to control the Universe for himself. Lucifer eventually comes to possess his true vessel, Sam Winchester, after the latter gives his consent, but this is short-lived as Sam manages to overpower him and control the vessel a little while later, long enough so he can throw Lucifer back inside the cage where he initially sprung him from (unintentionally).

Pellegrino was born in Los Angeles, California. He is married to Tracy Aziz and is the stepfather of her daughter and son. 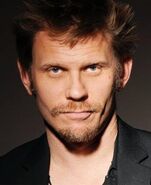