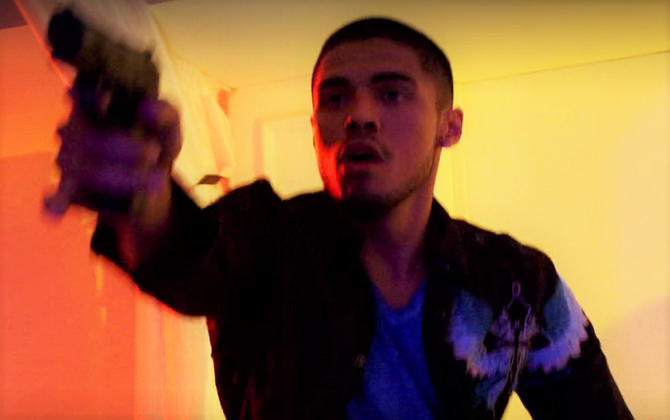 Two directly
Five others with his brother

Killed victims with a machete, sometimes by decapitation

No method of disposal

Marco Fuentes is a character in Season Five of the Showtime series DEXTER.

He is one of two killers in the Santa Muerte Case, with his brother Carlos Fuentes being the other one.

The Fuentes Brothers are major antagonists for Debra Morgan.

Marco, from his mugshot, was shown to be a young man with short black hair, about 5'9" in height and of average muscular build. He wore a white T-shirt and had a bit of facial hair on his chin, like a goatee, but not as pronounced as on his brother.

When he appeared at Club Mayan, he was seen as a taller man than his brother. He wore a dark blue shirt with special designs on it, and black pants.

His personality was much like his brother, although he had practically no speaking role, aside from flirting with Yasmin Aragon and later when he shot her. He enjoyed partying and living large. He watched the club scene, while his brother sat back like a king on his throne. Marco was quick to anger, seen when he did not hesitate in killing an innocent.

Marco was first mentioned, along with his brother, after Debra Morgan learned their identities and went to investigate a location where Carlos Fuentes was staying. When Debra confronted Carlos, a tense situation occurred, ending with a young bystander having his throat slit. Carlos escaped...thus being hunted from that point onward.

The detectives discovered that the Fuentes brothers were using ATM money from their victims in order to pay for their VIP service at Club Mayan, a popular nightclub.. Debra, as well as her team, staked out this location, but never spotted the brothers. However, Angel Batista arranged with Yasmin Aragon, a plan to capture the brothers at the club.

Later, during a second stakeout, both brothers entered the establishment through a secret passageway. As they enjoyed the party from their VIP seats, Marco began to flirt with Yasmin and, under orders from Maria LaGuerta, she went to sit with the brothers..

Carlos noticed Cira Manzon dressed up in a fancy club outfit and asked her to come over to him. She reluctantly agreed when LaGuerta gave the order to move ahead. The two sat down and, when Carlos put his hand up her dress, discovered a pistol. He yelled out that she had a gun, which forced Marco to immediately stand up and shoot in that direction, but he hit Yasmin in the back (killing her instantly). Marco then got into a gunfight with Joey Quinn, before making his escape during the confusion. His brother confronted Debra and he was shot in the head, dying at the scene.

After "Circle Us," Marco was never mentioned again. Presumed to be currently on the run, it was unknown if he kept killing people..

The Fuentes brothers were responsible for the deaths of at least seven people. They killed with inconsistent methods, using either a machete or guns. They also left symbols of the Santa Muerte religion at some crime scenes.

It is uncertain if Marco was responsible for any of the machete deaths, as his brother was the one seen using that weapon earlier in the season. He does, however, have two confirmed kills -- Yasmin Aragon whom he shot in the back and an innocent unnamed bystander in Club Mayan.

Murders committed with his brother, Carlos

Murders committed on his own 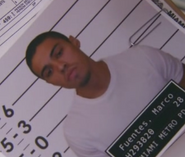 Marco, Yasmin Aragon, and Cira Manzon at the V.I.P. table
Community content is available under CC-BY-SA unless otherwise noted.
Advertisement