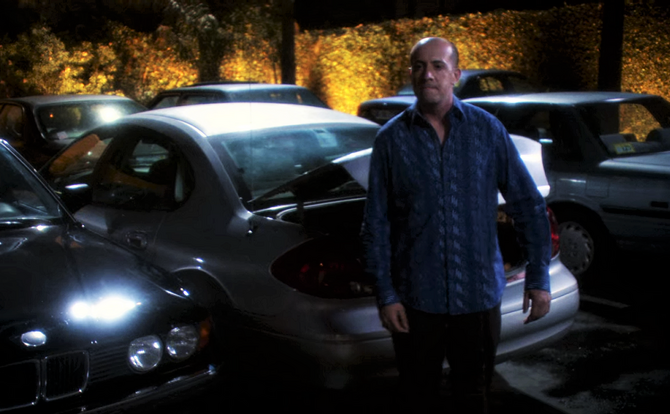 Marcetti is a minor character in Season Five of the Showtime series DEXTER.

He is one of Dexter Morgan's earlier kills (several months before Season One). He is featured in flashbacks that Dexter has of his first date with Rita Bennett.

Marcetti is a man about 5'11" tall, somewhat muscular, and of Italian descent. He has slight facial hair that is trimmed to be styled with his short, black hair. He wears a dark blue button up long-sleeve shirt with white designs, as well as black dress pants.

Not much is known of Marcetti's personality as he is only a past kill that Dexter is focusing on, and it's never revealed what he did. He does, though, appear to be either flirtatious or jokey in nature as seen while he's talking on his cell phone.

Although annoyed, he doesn't instantly lash out at Dexter (who purposely parked too close to Marcetti's car to get his attention and work as bait). As Dexter grabs him by the throat and injects him with the sedative, Marcetti tries to defend himself (which ends in failure).

It is unknown what exactly Marcetti did for Dexter to choose him as a target, although it can be assumed he murdered at least one person for no condonable reason and may have had the potential to kill again.

Dexter experiences a series of flashbacks after Rita's death. He remembers first meeting Rita in a restaurant, where Marcetti is chattering away on a cell phone in the background. He is not brought into focus until it's obvious that he's Dexter's true motive for the blind date.

In another flashback, Marcetti stands up and leaves the restaurant which forces Dexter to make a quick exit (while apologizing to Rita) and follow him into the parking lot. Dexter had purposely pressed his car against Marcetti's earlier, which distracts him long for Dexter to make his move. He quickly approaches Marcetti, grabs his throat and injects him with M99, which instantly knocks him out. Dexter then throws Marcetti into the trunk of his car.

Marcetti is last seen dismembered as bits and pieces in trash bags, with a hand poking out of one of the bags. While Dexter is on the Slice of Life throwing Marcetti's remains into the Underwater Graveyard, he receives a phone call from Rita, and they agree to have another date.

Marcetti sitting near door as Rita enters the restaurant

Marcetti pays for his meal

Marcetti on his way out