Start a Wiki
Mar Dorado worker is an unnamed Character in the Dexter Comics.

Steve Gonzalez used him as a slave worker in his Mar Dorado resort.

During the time that Dexter Morgan is forced to work as an slave for Steve Gonzalez at Mar Dorado, he is mocked by a fellow worker. An impatient Dexter cuts the latter's tongue without a second thought. The unnamed worker starts to bleed uncontrollably from his mouth. As punishment, Dexter is beaten by Octavio.

The worker's current status is unknown. 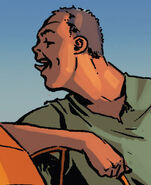 Mar Dorado worker
Add a photo to this gallery
Retrieved from "https://dexter.fandom.com/wiki/Mar_Dorado_worker?oldid=112252"
Community content is available under CC-BY-SA unless otherwise noted.