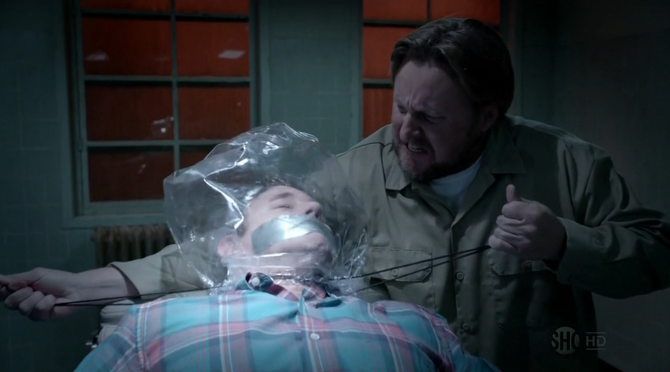 Shot in the head by Oliver Saxon

Placed a plastic bag over Welk's head and suffocated him

Welks left in skate park by the Brain Surgeon

Kidnapped by Oliver Saxon, who held a gun to his head, forcing him to suffocate Leonard Welks before Saxon shot him.

L​yle Sussman is a character in Season Eight of the Showtime series DEXTER.

He was a victim of Oliver Saxon aka The Brain Surgeon after being forced to kill Leonard Welks.

Sussman is kidnapped by Oliver Saxon and taken to The Treatment Room inside the abandoned Rendall Psychiatric Hospital. Once there, Saxon forces Sussman to kill Leonard Welks by suffocating him with a plastic bag, after which Saxon immediately shoots him in the back of the head.

Leonard’s body is found in a skate park with bruising on his throat and the same portion of his brain missing as with Robert Bailey. Joey Quinn is the first one to refer to the killer as “Brain Surgeon,” causing Vince Masuka to chuckle. Masuka says Leonard died by asphyxiation, and Angel Batista suggests looking around for the murder weapon. The plastic bag is found nearby by Dexter. Dr. Evelyn Vogel appears at the scene to tell Dexter that she received another delivery of a brain section.

Dexter returns to the lab and finds Sussman’s fingerprints on the plastic bag. Dr. Vogel, who is concerned that the killer is one of her former patients, has never heard of Sussman. Dexter says that she may have done a better job with her patients than she thought. Meanwhile, Masuka also finds a (partial) fingerprint on the duct tape covering Leonard’s mouth.

Dexter, believing that Sussman is The Brain Surgeon, breaks into his house and thoroughly searches it. Everything is very neat and nothing looks suspicious, except that Sussman’s houseplants are dying so he likely hasn’t been home for quite a while. Dexter finds a photo of a hunting cabin and a sign named Lake Nona. He thinks that an isolated cabin is the perfect place for a kill.

Batista and Quinn visit Sussman’s elderly mother to question her, but she provides few answers. She says her son is an avid hunter but she doesn’t know the address of his cabin. Mrs. Sussman hasn’t seen him for days and thinks he is just out hunting, She proudly produces a fur quilt she made from the animals her son has killed. It creeps out Batista and Quinn and they eagerly leave when called to a crime scene.

It’s after dark when Dexter finds Sussman’s cabin. Inside is a table of knives and hunting equipment, along with a metal chair capable of keeping someone strapped down. Suddenly, Dexter hears a thumping noise outside and heads through the back door onto the porch. He finds Sussman dead, hanging from a meat hook impaled in his skull.

Dexter returns to inform Vogel that he found Sussman murdered and suggests an accomplice killed him. However, Vogel believes the killer likely does everything alone. Dexter reminds her that Sussman’s fingerprints were on the plastic bag point and to his involvement.

Dr. Vogel calls Dexter from her car, frightened that someone is inside her house. She waits for Dexter to arrive and he searches the house, but finds no one. However, a DVD was left on her desk. When played, it reveals that Sussman was forced to kill Welks and then was brutally shot in the back of the head with a pistol. The true criminal is a mysterious man wearing blue gloves. Dexter realizes that he was wrong about Sussman being the killer and begins to lose confidence in his abilities.

By the time the police investigate the cabin, Sussman is found lying on the floor with a rifle wound in the back of his head. Sussman’s front teeth are broken, apparently from when he placed a shotgun in his mouth and pulled the trigger. This results in Sussman's death ruled as a suicide and the Brain Surgeon Case being closed. Dexter, though, knows that Sussman was shot postmortem and the killer staged the scene to get the cops off the case.

Vogel receives a mysterious text telling her to look outside. When she opens the door, she finds two tiny boxes, labeled "His" and "Hers" on her step. Inside the boxes are sections of Sussman's brain (the occipital lobe, responsible for vision). Dexter believes this indicates that the killer is watching them.