Luke Andrew Kruntchev (born 28 March 2009) is an actor. He is the twin brother of Evan George Kruntchev.

He played Harrison Morgan, son of Dexter Morgan, in the Showtime series DEXTER.

Due to restrictive child labor laws in the film industry, he and his twin brother shared the role.

His TV credits include roles in Days of Our Lives and Last Man Standing. 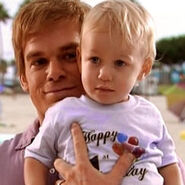