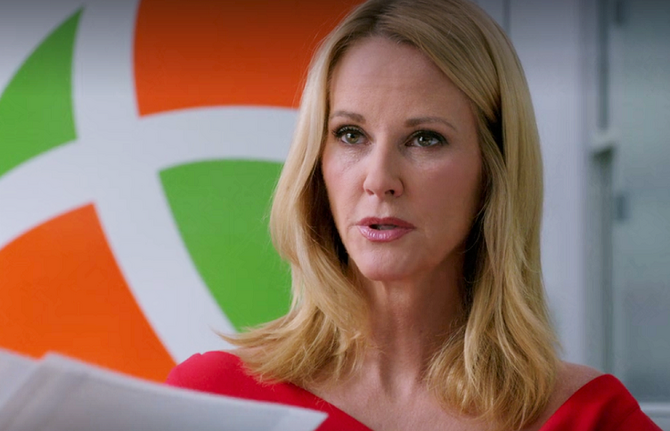 Unknown
Lucy Gerard is a character in Season Eight of Showtime's series DEXTER.

She hires private investigator Jacob Elway to find proof that her husband is cheating on her.

Lucy suspects that her husband is having an affair and she consults with investigator, Jacob Elway, and Debra Morgan. They are hired to find proof of his infidelity and Lucy is given info about the retainer and payment schedule. Elway says they will get back to her as soon as they find something. On the way out, Lucy tells Elway that she is very nervous, with him stating that it’s important to find out the truth. Debra speaks up, telling Lucy that she thinks the truth is over-rated, and Elway frowns. After Lucy leaves, he tells Debra they need to work on her client relation skills.

Debra and Elway are sitting in a car while he snaps photos of Lucy’s husband making out with a topless woman in a nearby van. Clearly disgusted by this case, Debra comments that’s it’s “really fucking classy.” Elway begins to question Debra about Joey Quinn, who dropped Deb off at work that morning. Debra says they used to date, but she refused his proposal. This astonishes Elway and he remarks that he wouldn’t stay friends with someone if they refused his proposal. Debra laughs and calls him a “giant pussy.”

Lucy returns to Elway Investigations and is shown the photos of her husband cheating. As she slowly looks through them, Elway tells Lucy they can help with a favorable divorce settlement. When Debra offers to forward the photos to her attorney, Lucy says that she’s not sure it’s really her husband. This astonishes Elway and Debra and they assure her that they were very careful and it is her husband. However, Lucy replies that it was a mistake and she’s sorry for wasting their time. As Elway begins to object again, Lucy says that she’ll leave a check at the front desk, and he doesn’t say another word.

After Lucy departs, Debra expresses disbelief at what just happened. Elway says that Lucy just didn’t want to see it, and people get used to living in denial...it’s easier. This causes Debra to reflect on what is going on in her own life.

Lucy tells Elway she is nervous

Lucy looks at photos of her husband cheating

Lucy says it was mistake to hire them and apologizes

Jacob and photos of Lucy's husband
Community content is available under CC-BY-SA unless otherwise noted.
Advertisement