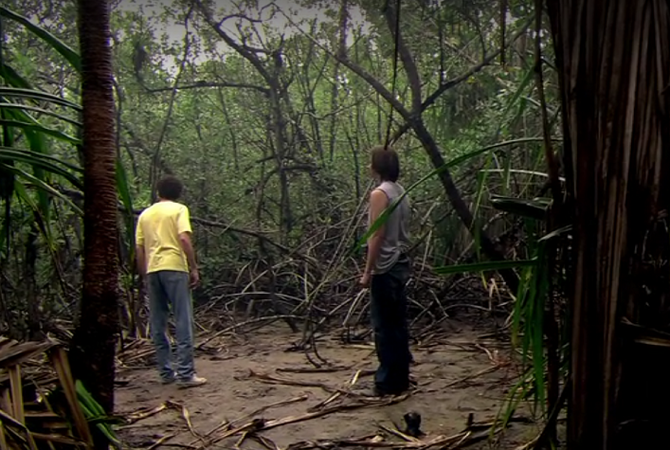 Lucas is a Character in Season One of Showtime's series DEXTER.

He is a young man living in the Homestead Halfway House, alongside Jeremy Downs.

Jeremy lures Lucas to a local swamp that is off limits to the public, by telling him that he will show the boy an alligator that he had found earlier. In reality, Jeremy is attempting to recreate his first kill. Meanwhile, Dexter Morgan is following Jeremy, looking for evidence to justify killing him, and observes the two entering the swamp.

Lucas grows increasingly cautious of his friend, consistently asking where the alligator is, as they go deeper. Jeremy belittles him by asking if he's a "pussy" which Lucas denies and they go farther. When they reach a secluded area, Jeremy tells Lucas to look in the distance for the alligator...watching as he slowly moves closer to the spot. Shortly, Lucas's paranoia gets the better of him and he stops walking, turning his attention to Jeremy, as he realizes that there isn't an alligator there.

As Jeremy begins to pull out his knife to kill Lucas, Dexter suddenly comes out from the woods and scares them (also preventing Lucas from learning that Jeremy has a knife). The two run off, with Lucas's life being saved due to the intervention.

Just a few yards away, there actually is an alligator that startles Dexter as he wanders off in thought, following his interruption of Jeremy's ritual.

Jeremy and Lucas
Add a photo to this gallery
Retrieved from "https://dexter.fandom.com/wiki/Lucas?oldid=115048"
Community content is available under CC-BY-SA unless otherwise noted.