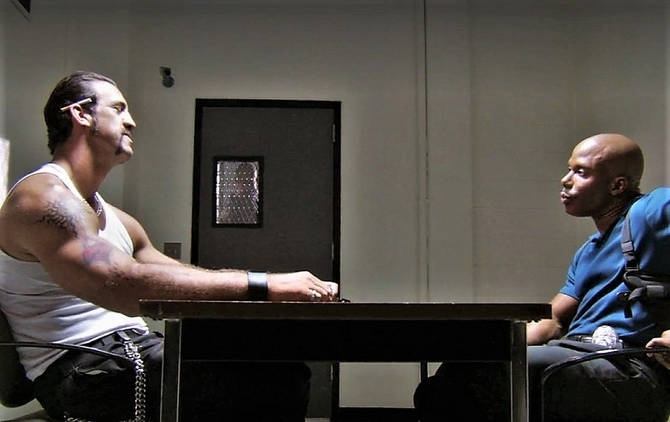 Machete and the 29th Street Kings

Usually chopped up his victims with a machete, but also sent members of his gang to do the deed

He lived in a dangerous world, and was a dangerous person. People that disobeyed him or had evidence that might send him or his fellow gang members to prison were killed. He also killed those who betrayed the gang by either snitching or leaving the gang.
Little Chino is a character in Season Two of the Showtime series DEXTER.

He was the enforcer of a gang called the 29th Street Kings.

Chino is a Latino with short, black, slicked-back hair sporting long sideburns and a handlebar mustache down the side of his mouth. After a confrontation with Dexter Morgan, he has a gash crudely sewn together on the right side of his face. He hides how he received it from the police, joking that he cut himself while shaving.

The most noticeable feature about Chino is his height and muscular structure. The man stands at 6'8" and is 278 pounds of pure muscle.

His mere presence is enough to gain everyone's attention as he walks into the police station, sporting a sleeveless shirt that shows off his heavily muscled arms. There is a tattoo on his right arm of a heart wrapped in vines, with blood drops falling from the base. Each drop represents a kill. Above the tattoo on his shoulder is an eye symbol in the center of a sun structure.

The rest of Chino's attire consists of black pants equipped with chains, plus a pair of black shoes. He has a chain necklace around his neck, as well. As a fashion statement, he wears a cigarette placed over his right ear, and a pair of aviator sunglasses.

Chino is a gruff, rough individual with the attitude of a man who knows that he's big and very intimidating. He dwarfs Sergeant James Doakes in muscular physique, and Doakes on his own is intimidating. Doakes, however, remains in Little Chino's face about the crimes linked to him. Chino refutes each accusation and adds why the witnesses would be unreliable on the stand (such as drug-use, etc.). Never one to feel scared, Chino sits calmly with an impressive confidence that he will walk free. He even uses technological manipulation via a video to force the police into accepting an alibi revolving around the death of Eva Arenas. In reality, one of his gang members did the deed.

Chino's M.O. is to use a machete to hack his victims to death. He shows no remorse, and will promptly kill a snitch in order to silence all others. While Dexter collects blood slides, Chino collects tattooed blood drops for his kills. During a tattooing, he proudly grins and nods his head in satisfaction for adding another one to his arm.

He does have a temper and flips out when his car is filled with chickens. He cusses left and right while somewhat comically jumping out of the car. When he looks inside the car, he yells, "FUCK THAT SHIT!" His anger extends to tracking down Joey Nunez after his entire gang is busted by information given up by the kid. However, on his third attempt, Dexter is able do capture Chino before he kills Joey.

Chino, like Carlos Guerrero, was a man that the Miami Metro Police Department knew was guilty of murder, but were unable to get him convicted. He always escaped from justice with the help of an attorney or a sound alibi. If needed, he had witnesses killed. This made him a perfect target for Dexter to grab, if not for his size and strength. Dexter targeted Chino not only because he was a challenge, but also due to the sad look he received from Marissa Arenas and how her mother's murder was a similar situation to how he lost his own mother.

Little Chino was first mentioned at a crime scene, where a member of a street gang was found dead on rocks near a bridge in Miami. The victim's mother saw her son's body and told Dexter in Spanish that a man named Little Chino had killed him, and that she wanted him to be killed like a dog. Soon afterward, Little Chino was brought to the police station, where Doakes interrogated him. Little Chino denied his involvement in this particular murder and was released.

Dexter tracked Little Chino to a tattoo parlor where his gang got their tattoos. He waited outside, while Little Chino received his next teardrop for the last man he killed. Dexter managed to capture Chino despite his large size. He did this by filling his car with live chickens, which distracted him long enough for Dexter to sneak up and inject him with two syringes of M99. He took Little Chino to Jimmy Sensio's voodoo shop, where he intended to kill him. Dexter, still fumbling with his ritual since killing his brother, accidentally severely cut Chino's cheek while collecting his blood sample. Dexter had only strapped Chino down with plastic wrap and, because of Chino's unusual strength, Chino was able to break free and escape.

Soon after, Chino presumably ordered one of his gang members to kill the mother of the murdered gang member because she had given his name to the police. To the surprise of the homicide department, especially Dexter, Chino showed up at the police station with his lawyer. They had evidence that proved Chino didn't kill the woman. Dexter managed to avoid being seen by Chino, but watched his interrogation via video camera. When Maria asked Chino about the stitched up cut across his cheek, Chino said that he had cut himself shaving.

Later that night, Dexter stalked Chino to a celebration party where other members of his gang were hanging out. Dexter realized that Chino would be harder to capture now that he saw his face. Before he left work, Dexter had checked out a tranquilizer gun and lance from the weapons cache at the police department, claiming he needed them to subdue an alligator that killed his dog. When he confronted Chino, however, Chino was calm and told him that he was waiting for him. Just then, several members of Chino's gang members ambushed Dexter, but he managed to escape by hiding in the sewer.

The next day, after a boy, Joey, revealed information to Debra about the 29th Street Kings front in an auto shop, Chino's gang members were arrested. Chino then attempted to kill the boy, but Dexter, trapped him in a garage elevator and lanced him with a police tranquilizer. Chino was taken to a nearby location, where Dexter strapped his whole body down more securely. He then cut open Chino's stitches to take a blood sample. Chino tried to break free again, but this time he was unable to move. Dexter showed him a picture of the woman his gang had killed and, even though Chino did not kill her himself, Dexter said that her blood was on his hands and that he left behind death and misery. When Chino asked Dexter what he will leave behind, Dexter replied, "A world without you." Having regained his confidence, Dexter killed Little Chino with his own machete by stabbing him in the chest. Little Chino became the first of Dexter's victims to be dumped in the Gulf Stream.

While Little Chino's body was never found, the blood slide containing Little Chino's blood was found in James Doakes car later on in the season. Thus, the Miami Metro Homicide learned that Chino was dead, and attributed it to The Bay Harbor Butcher.

Four years later, Dexter made up a bedtime story to tell Harrison Morgan.

"Once upon a time there was a Little Chino, scaring everyone who lived in the hood. Nobody knew what to do. But Daddy did. He would slay that icky monster, hiding what was left of him in a special place no one would ever find." 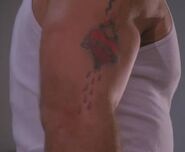 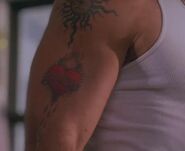 Dexter cuts Little Chino's face too deep, and he awakes to escape

Little Chino at a celebration

Little Chino on a kill table