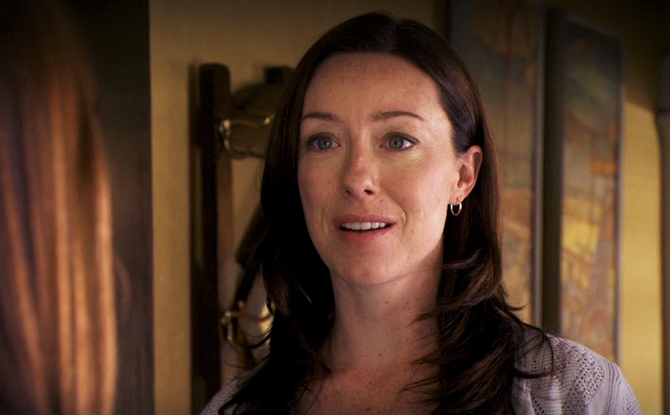 Lisa Marshall is a character in Season Six of the Showtime series DEXTER.

She is the older sister of Travis Marshall.

Lisa is a kind teacher at an elementary school. She helped raise her younger brother, Travis, after their parents died in a car crash. Travis seems to be always working and she wishes he would spend more time with her. Apparently, they spent more time together in the past, as indicated by her comments when he says he can only stay an hour for dinner. When Debra interviews her about her brother, Lisa remains protective of him.

While Lisa is in her kitchen, Travis quietly enters her house, unnoticed. When he touches her shoulder, she's startled, exclaiming, "God damn!" Travis rebukes her, saying he wishes she wouldn't say that. They sit down to dinner but Travis eats very fast because he has to get back to "work." However, Lisa persuades him to stay for dessert by stating that she rarely gets to see him now due to his "work."

When Travis visits Gellar at the church that night, Gellar places a hot iron on his own arm. Travis begs him to stop and promises Gellar that he won't see his sister again. Gellar removes the iron and tells Travis that it is not his sister's job to take care of him, but Gellar's.

Travis visits Lisa at the school where she works. He finds her in an outdoor setting, surrounded by little kids who are painting at easels. Lisa is very happy to see Travis and introduces him as a talented artist. As Travis looks at the children, he believes they are all doomed as the End of the World approaches.

While at his sister’s house, Travis notices through a window that Professor Gellar is outside. He opens the door and informs Gellar that he’s “done with everything.” Gellar replies that he will carry on God’s work for both of them.

Travis is again at his sister's house and he’s cooking breakfast. He takes a small bag of garbage outside to throw away. When he opens the trash can, he finds a broken photo of himself and Professor Gellar.

Because Travis was previously Gellar's student, Debra interviews Lisa at her house. As they stand talking at the front door, Travis observes them as he rides by on a bicycle.

Later, Travis goes to the school where Lisa is working to save her. Suddenly, Gellar appears out of nowhere holding a shovel. He tells Travis there is work to do and slams him in the head with the shovel, causing him to black out.

The next morning, Lisa is found dead outside the school, posed in The Whore of Babylon Tableau. While at the crime scene, Dexter wonders if Travis went back to Gellar or paid the price for defying him.

Travis wakes up in the church and realizes from a painting that Lisa is dead, but he doesn't remember killing her.

Travis has dinner at Lisa's house

Lisa, as the Whore of Babylon