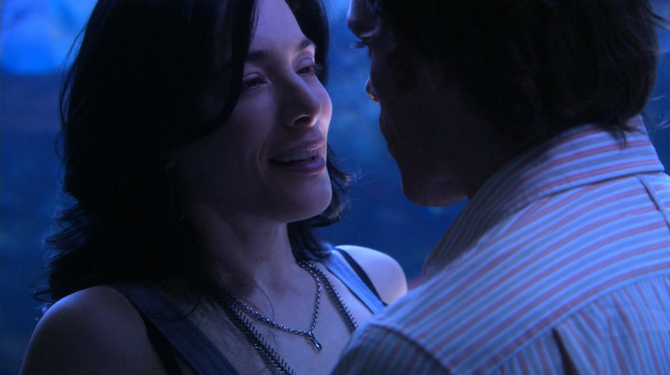 Lila West: The Seductress and Pyromaniac

Lila West is a character in Season Two of Showtime's series DEXTER.

She is a Sponsor for a Narcotics Anonymous Group, who claims to have overcome her own vice: meth addiction. She works as a sculptor, often stealing items to use in her abstract (often disturbing) projects.

She first meets Dexter Morgan when he joins a NA group to appease his girlfriend Rita Bennett, who is convinced that Dexter is addicted to heroin (which he is not). The meetings and Lila's advice drive Dexter to delve deeper into trying to understand and overcome his dark side. He ends up forsaking a number of things in his life (including Rita).

A romance is soon sparked between Lila and Dexter, however, he learns that she has a violent response to betrayal and is not above exploiting others for her needs. She even goes so far as to set her apartment on fire to draw Dexter closer to her. Her manipulative nature wards Dexter away, realizing that she is "poisoning" his life. Lila even frames Angel Batista as a date rapist as part of her diabolical thinking.

Her penchant for setting fires causes the death of James Doakes and a former boyfriend. Later, she attempts to kill Rita's children, Astor and Cody Bennett, as well as Dexter himself. He finally decides that Lila has to be "taken care of," resulting in her demise in Paris, France.

Initially, Lila appears to be a fun-loving, compassionate person. However, it is soon revealed that Lila is, in fact, eccentric, obsessive, and manipulative. She frequents support groups to observe the emotions that she is incapable of feeling.

She recognizes Dexter's "mask," and is not fazed by his underlying darkness. However, Lila thinks that Dexter is a heroin addict and does not learn the truth about him until later in the season. By then, she is obsessed with Dexter, believing him to be her soul mate.

Lila's unstable personality, pale skin, British heritage, and her sociopathic tendencies are contrasts to Rita's bright personality, tanned skin, American heritage, respect for the law, and love for her children.

Due to Lila's attention seeking behavior, she presents a danger to Dexter being uncovered as a serial killer. After a breakup, Dexter returns to Rita whose presence in his life helps shape him into being more human.

It's apparent that Lila is from England, possibly London. This is clear from her accent, the threat of deportation from Debra (meaning she is from a country outside of the USA), and that she mentions in "That Night a Forest Grew" how "Everybody walks in London... of course, they're usually walking to the pub!" Also, the last episode of Season Two is called "The British Invasion".

While in Naples, FL, Lila tells Dexter the reason why she started to attend Narcotics Anonymous. She was hooked on meth for years, binging and crashing, but finally had it under control. Then she met Marco, a boyfriend who became her dealer. By the time he left her, she was strung out, feeling only rage and that nothing mattered. One night, Lila was so "fucked up," she went to Marco's house and burned it to the ground. Lila claims that she didn’t know Marco was passed out inside. That same night, she went to her first NA meeting and has remained clean for five years. Dexter asks Lila if Marco deserved it. When she answers, "Yes," Dexter tells her that she didn't do anything wrong.

Lila is a compulsive arsonist, and is responsible for at least four fires:

Lila is introduced as a recovering meth addict when Dexter is sent to a Narcotics Anonymous meeting by his girlfriend, Rita Bennett. She takes an immediate interest in Dexter and sees through his facade, sensing that he is hiding his true self. With Dexter now involved in the drug recovery program, Lila becomes his narcotics sponsor. They begin to spend more time together, much to Rita's chagrin. While Lila attempts to help Dexter with his problem, she thinks it is a heroin addiction.

By Lila's advice, they set out on a road trip to seek closure with the person who is responsible for his Dark Passenger -- the man who killed his mother, Santos Jimenez. When a conversation with Jimenez ends in failure, Dexter punches him several times and lays him on a pool table. Dexter begins to lose control and is about to kill Jimenez in vengeance, but he is calmed down by Lila over the phone, who is convinced that he is about to use heroin again due to the stress of meeting his mother's murderer. This experience brings Dexter and Lila closer together and Dexter is convinced that Lila can help him manage his urges to kill.

On their return, Rita discovers Dexter's secret road trip when Lila mentions they stayed together in a motel on his answering machine. Rita assumes that Dexter and Lila had sex on their trip, and angrily dumps him. Out of stress and rage over the breakup, Dexter visits Lila's apartment only to end up sleeping with her due to the sexual tension. They continue to see each other, but she starts to become controlling and suspicious of him.

Lila begins to feel that Dexter is drifting apart from her while he is preoccupied with the Bay Harbor Butcher case and visits Rita. This drives Lila to reveal her hidden insanity. She sets fire to her own loft, and helps Santos Jimenez attack Dexter (believing that she and Dexter are closest in times of crisis). She also breaks into Rita's house, afraid that Dexter might have gotten back together with her. These actions convince Dexter that Lila is too unstable, causing him to immediately end their affair.

In retaliation, Lila begins to date Dexter's co-worker, Angel Batista. When she realizes it has no effect over Dexter, she buys Rohypnol from a street dealer named Chad, telling him, she was sent by Tim. She engages in rough sex with Angel and then accuses him of rape in an attempt to gain Dexter's sympathy. After sex, she took the Rohypnol she bought from Chad, so that it would look like he drugged and raped her.

After Angel has been arrested, enraged Debra runs a background check with Agent Lundy and discovers that Lila's real surname is West (not Tournay) and that she has been illegally living in the United States on an expired Visa. Debra then confronts Lila and demands that she leave the country or be deported.

Lila fumes while she watches Dexter on his boat with Rita, Astor, and Cody. While they are preoccupied, Lila breaks into Dexter's van, steals his GPS device, and follows the instructions to the Cabin in the Everglades. Arriving at the cabin, she finds Doakes caged inside and learns from him that Dexter is the Bay Harbor Butcher. She decides to protect Dexter and turns on a flame before releasing gas from propane tanks inside the cabin. Doakes, unable to escape, is killed when the cabin explodes.

After Dexter discovers that Lila killed Doakes, he meets with her at the aquarium to thank her for the intervention. She is excited when he offers her a chance to run away with him but, in reality he plans to kill her in a remote location. Unfortunately, Lila discovers that Dexter is going to kill her and she abducts Astor and Cody as revenge. When Dexter finds them in Lila's loft, she locks them all inside and sets it ablaze, telling Dexter that he, "could have had it all." With difficulty, Dexter and the kids narrowly escape, and Lila flees Miami. Dexter tracks Lila down in France and kills her by stabbing her in the heart.

Lila waits for Dexter outside NA

Lila drops in at Miami Metro

Lila colors over a painting in a motel room

Dexter breaks it off with Dexter

Dexter asks Lila if she believes in monsters

Lila is entranced by fire

Lila proves to be an arsonist

Lila is obsessed with Dexter

Dexter meets Lila at the aquarium

Lila tells Dexter that they are meant to be together

Dexter and Lila kiss at the aquarium 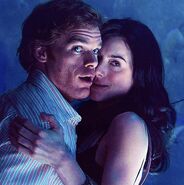 Dexter and Lila are reprimanded for kissing at the aquarium

Dexter asks Lila if she's afraid of him

Dexter tells Lila that she has no real feelings

Lila in Paris
Add a photo to this gallery
Retrieved from "https://dexter.fandom.com/wiki/Lila_West?oldid=92295"
Community content is available under CC-BY-SA unless otherwise noted.