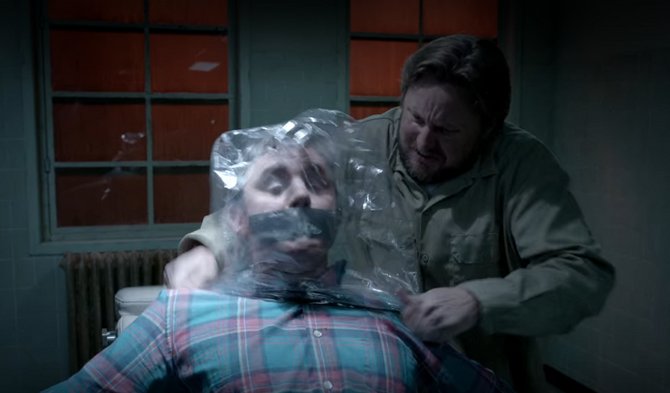 Suffocated by Lyle Sussman under orders from Oliver Saxon

Single
Leonard Welks is a character in Season Eight of the Showtime series DEXTER.

He was murdered by proxy under the orders of The Brain Surgeon.

Lyle Sussman approaches Welks, who is strapped to an exam table. Welks can't speak because duct tape covers his mouth. The song "Make Your Own Kind of Music" by Mama Cass Elliot is playing in the background. Sussman apologizes to Welks, stating that he doesn't deserve this, but he doesn't have a choice. He puts a plastic bag over Welks's head and suffocates him.

Welks' body is found the following day in a skate park. When Dexter arrives on scene, he turns Welks' head over. This reveals that the back of his skull was sliced open and his anterior insular cortex [1] had been scooped out (like with Robert Bailey). The plastic bag used to smother Welks had been (purposefully) left at the crime scene, just as Bailey’s murder weapon was left near his body. The bag is checked for prints and one is a match to Sussman, who is then suspected of being The Brain Surgeon, a serial killer.

Later, a DVD is left in Evelyn Vogel's house which reveals that Sussman was coerced into the act of killing Welks by the true Brain Surgeon. He then brutally shoots Sussman in the back of the head to set him up. This leaves uncertainty as to the killer's true identity.

Welks in The Treatment Room