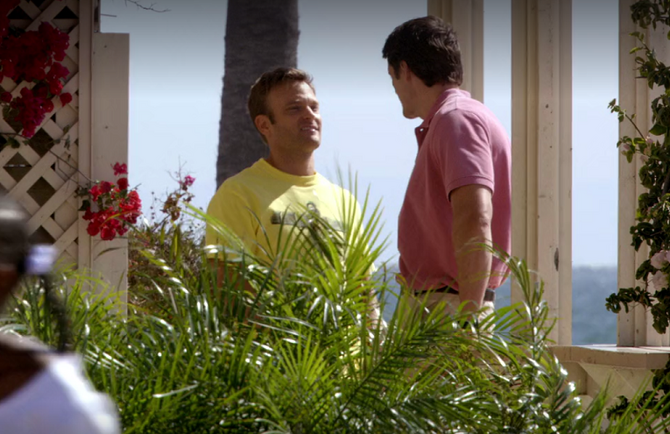 Lance Robinson is a character in Season Five of Showtime’s series DEXTER.

He was a serial killer of homosexual men who was targeted by Dexter Morgan for a ritual kill in an attempt to "get back on track." In the end, however, Lance's death was used in a way that covered Dexter for the murder of Lance and Dan Mendell.

Lance is a fairly muscular man with mid-length blonde hair that's fashioned to partially stick up. He wears a yellow T-shirt (later, a blue one) with an anchor on it.

Lance is responsible for killing at least four men in a brutal manner during sexual encounters.

At a kiddie playground on the beach, Dexter is playing with his son, Harrison. At the same time, he is stalking a new target, Lance Robinson, who lures gay men (via internet ads) into casual encounters, and then murders them. Dexter watches Lance as he meets a man and they head together into a nearby public restroom. He thinks that Lance will be an easy kill...like old times.

Dexter and Lance communicate via a dating website and they arrange to meet after dark at the playground. Dexter rents a large RV (to use as a kill room) and parks it near the restrooms. Lance shows up, referring to Dexter by “Ten Inches of Pure Steel” (his internet ad moniker). Dexter quickly knocks Lance out with M99, and moves him into the RV.

While Dexter is wrapping Lance in plastic wrap, Lumen Pierce calls, in a panic, saying she just shot one of her rapists and needs his help. Highly irritated, Dexter is forced to put things on hold. He tosses Lance into the trunk of his car, and heads to a warehouse where Lumen is waiting, while hoping the M99 doesn't wear off on Lance.

Inside the warehouse, Dexter finds bullet holes, a missing body, and a distraught Lumen. Dexter follows the blood trail and tracks down the man that Lumen shot, still alive. Dexter looks through his wallet, learning that his name is Dan Mendell and he is a children’s dentist. After confirming that Dan is one of Lumen's rapists, Dexter snaps his neck.

Lumen hoses down the area, and Dexter gives her Lance’s T-shirt to cover her bloodied dress. Despite her insistence that she help move the body, Dexter sends her away to hide in his house.

While Dexter is dealing with Lumen’s problems, the M99 wears off, and Lance wakes up. He escapes Dexter's car, and makes a run for it (still wrapped in plastic). Dexter immediately gives chase. Meanwhile, Debra Morgan, Vince Masuka, and two Paramedics are nearing the area where Dexter is pursuing Lance. Just before Lance makes it into the group's flashlight beams, Dexter grabs him, strangles him with plastic wrap, and drags him back to the warehouse.

Dexter quickly formulates a plan. Unable to dispose of Lance in the normal fashion, Dexter places his body next to Dan's and sets up the scene to appear as though they killed each another during a sexual encounter.

During the crime scene investigation, Masuka's wild imagination and sexual expertise creates a scenario that he calls “autoerotic mummification” to explain the death of the two men. Lance and Dan's bodies are taken to the morgue and the case is (temporarily) closed.

Lance and man head into restroom

Lance is wrapped in plastic

Masuka describes what supposedly happened
Add a photo to this gallery
Retrieved from "https://dexter.fandom.com/wiki/Lance_Robinson?oldid=106728"
Community content is available under CC-BY-SA unless otherwise noted.