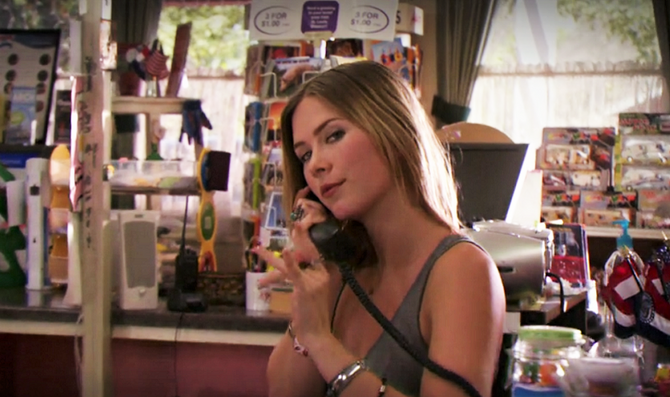 Store clerk at the Rest Stop Mini Mart
Laci is a Character in Season Six of the Showtime series DEXTER.

She is the clerk at the Rest Stop Mini Mart where Dexter Morgan stops on his road trip to Nebraska. Dexter distracts her with sex so that he can steal her handgun.

She is an attractive young woman, roughly in her early 20s, nearly half Dexter's own age.

When Dexter enters the mini-mart, he spots Laci talking on the phone and she looks back at him flirtatiously. Brian tells Dexter to talk to this cute girl. As Dexter approaches her, Laci intentionally references her sexual experience with the person on the phone. She quickly hangs up and walks over to the register. Dexter notices a holstered revolver under the counter.

Dexter gives Laci a big smile and attempts his own version of flirtation by going into a short rant about the death of his own mother (when it started out simply referring to Laci's comment about not "fucking while mothers are around"). Brian says, "Let's do her," meaning "Let's kill her," but Dexter takes a different tack. He is able to play Laci, and they end up having sex in the back room.

Dexter finishes with Laci and leaves her in the room as she gets dressed. As he walks to the counter, Brian quips," Wouldn't it have been more fun to kill her than to fuck her?" Dexter says, "I got what I wanted," and grabs the revolver from under the counter, along with a bag of nachos. He then casually walks out of the store.

As Dexter joyrides toward Nebraska, he fires off round after round through the car window. The gun is found by Norm, who is promptly killed when he threatens Dexter with it..

Laci is one of the seven shown women with whom Dexter sexually interacts during the series. His encounters with Rita, Lila, Lumen, and Hannah are all romantic in some fashion.

Dexter has sex with Laci and then steals her handgun

"Wouldn't it have been more fun to KILL HER, than fuck her?"
Community content is available under CC-BY-SA unless otherwise noted.
Advertisement