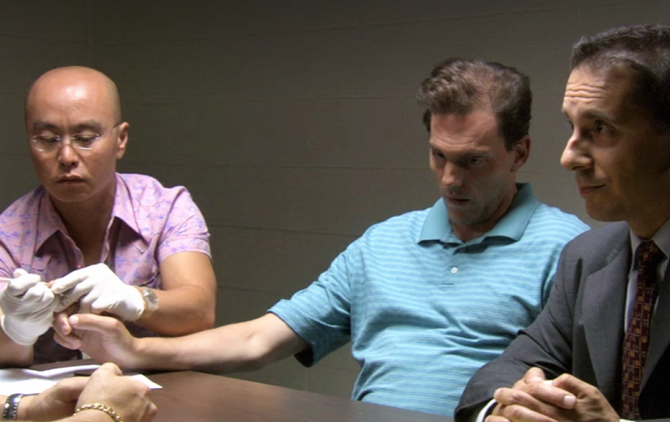 Decapitated with a cleaver

Ran drug dealer over with his car;
Pushed abusive husband down a flight of stairs;
Attack on John Henry similar to Dexter's, only messier

Wanted to follow in The Bay Harbor Butcher's footsteps and became a vigilante, although two of his kills didn't use the Butcher's methods

Ken Olson is a character in Season Two of the Showtime series DEXTER.

He was a minor killer who attempted to copycat The Bay Harbor Butcher.

Ken has a prior criminal record consisting of a minor assault charge. He also killed two people, and attempted to kill a third.

The first person that he killed was a drug dealer. He ran over him with his car and stole his stash of cocaine.

After that, Ken began sleeping with his boss' wife, causing her husband to become abusive. He then killed the husband by pushing him down a flight of stairs and making it look like an accident. This resulted in Ken losing his job, and his girlfriend breaking up with him.

When Ken's mother, who was in a retirement home, had a close encounter with petty burglar, John Henry, he tried to kill him and make it look like the work of The Bay Harbor Butcher.

Later, Ken claimed that his action were a form of vigilantism.

Ken decides to take revenge on John Henry by copycatting the M.O. of The Bay Harbor Butcher. His attempt is sloppy and only vaguely similar to Dexter's work. Dexter uses plastic restraints and surgical tools, while Ken used rope and a hatchet. John escapes and tells the police what happened. Ken is consequently arrested on suspicion, but since the authorities have no concrete evidence linking him to the crime, they let him go and order a protective watch on John Henry.

Later, Dexter sneaks into Ken's house, but Ken returns unexpectedly. Dexter grabs him in a rear naked choke hold and questions him. Ken is remorseless and admits to his crimes. Realizing that Dexter is the real Bay Harbor Butcher, he expresses his admiration for Dexter's work. Dexter, not originally intending to kill Ken, chokes him until he passes out.

He brings Ken back to the train car where he had tried to kill John Henry. When Ken awakes, Dexter lectures him on the proper setup of a kill room. Even though Ken claims that he is doing the same kind of work as Dexter, he is chastised by Dexter for killing people for personal benefit. Dexter then decapitates and dismembers Ken with a cleaver.

Unlike most victims, Dexter purposefully leaves Ken's remains for the police to find to send a message to discourage copycats.