Kathleen Noone (born 8 January 1945) is an American actress.

She played Maura Bennett, the paternal grandmother of Astor and Cody, in the Showtime series DEXTER.

Noone was born in Hillsdale, New Jersey, as Kathleen O'Meara. She graduated from University of Miami and Southern Methodist University. The following years, she performed on off-Broadway stage. In her early 40s, she moved from New York to Los Angeles for a career in Hollywood. She married Bill Noone in 1967, and they divorced in 1976. Noone kept her married name as her professional name. 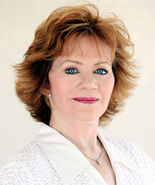 Add a photo to this gallery
Retrieved from "https://dexter.fandom.com/wiki/Kathleen_Noone?oldid=107339"
Community content is available under CC-BY-SA unless otherwise noted.