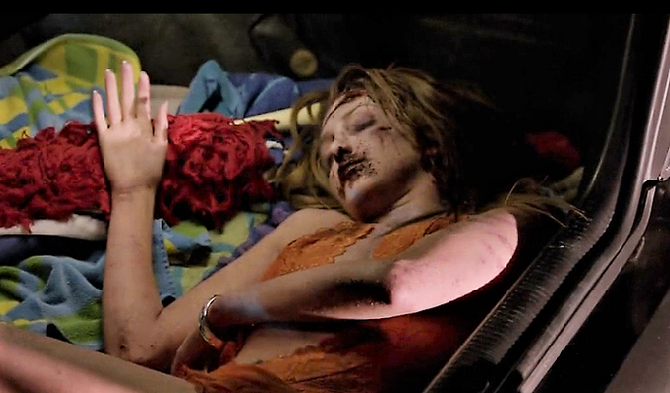 Kaja Soroka is a character in Season Seven of the Showtime series DEXTER.

She was a stripper who was killed by Viktor Baskov.

A while after Detective Mike Anderson left the church where Travis Marshall was found dead, he noticed a man with a flat tire, and pulled over to help him. The man tried to stop Mike from opening the trunk of his car to get the jack. Smiling, Mike told him, "Relax, I'm a cop."

When Mike went ahead and opened the trunk, he was surprised to discover a dead woman inside. The man quickly pulled out his gun and proceeded to shoot Mike two times, killing him. The man then removed a bracelet from the dead woman, wiped his fingerprints from his car, and took off in Mike's car.

The next day, Miami Metro Homicide learned that the woman's name was Kaja Soroka and she had worked as a stripper for The Fox Hole. The search began for her killer. Dexter Morgan learned from Interpol that the killer's identity was Viktor Baskov, but he did not tell anyone.

Kaja was later avenged when Dexter ambushed Victor in a restroom at the Miami airport, injected him with M99, put him in a wheelchair, and killed him in the Unclaimed Baggage unit. Dexter dumped his body without dismembering it into the Gulf Stream. He then went home to his apartment to find Debra waiting to confront him about his secret life.