Justin Huen is an American actor, producer, and director.

In 2011, he played Diego, an ex-con, a mechanic, and faith leader in the Showtime series DEXTER.

He has appeared extensively on stage.[1]

He was born and raised in Los Angeles, while his ethnic roots tie him back to China, Ireland, and Latin America. He attended Alhambra High School, where his main interest was playing football. He then juggled jobs as a carpenter, HV/AC field technician, and a designer of window displays for The Gap. After this, he returned to school, enrolling at Rio Hondo Junior College in Whittier, California, where he first began performing as an actor in theatre. 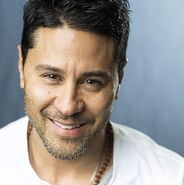