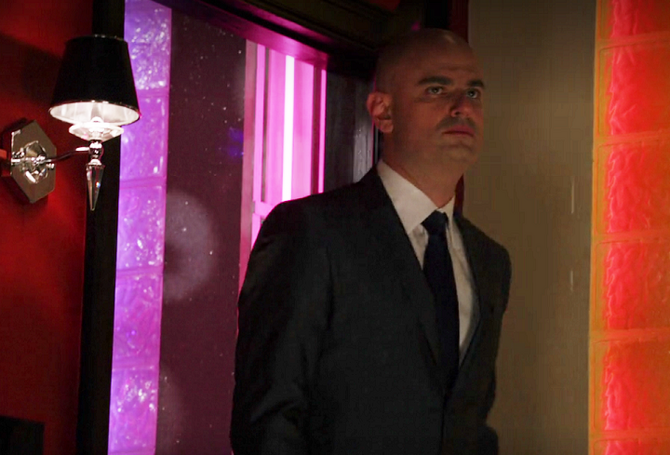 Bludgeoned with a lamp by Hannah McKay

Jurg Yeliashkevych (spelled Jurg Yeliaschkevych on IMBd [1]) is a character in Season Seven of the Showtime series DEXTER.

He works for Isaak Sirko, the leader of the Koshka Brotherhood, often accompanies his boss. Jurg's responsibilities appear to be Isaak's bodyguard and assistant. Although he has no confirmed kills, Isaak's comments indicate that Jurg is a skilled killer.

Jurg is a tall man who keeps his head bald. He rarely smiles, while his boss, Isaak displays a variety of emotions. He always wears a black suit, similar to that of a bodyguard or agent. Jurg almost always wears a Bluetooth headset, taking calls that come in for Isaak.

Jurg takes his job to guard Isaak very seriously and has a fierce loyalty to him. Despite Isaak's quest for revenge over Viktor Baskov's death, Jurg chooses to stay by his side at his own risk.

Jurg follows Isaak's orders without question or hesitation. Isaak himself has commented on Jurg's loyalty, stating that he's gone beyond the call of duty and even considers Jurg not just as a bodyguard, but as one of his closest friends. He even offers Jurg a chance to leave so that he won't be killed by the hitmen after him, but Jurg declines.

Whenever accompanying Isaak, Jurg keeps a serious expression at all times, staying near Isaak in case he is needed. He is able to speak English, just as his boss can.

Of note, he takes no surprise to his boss killing Tony Rush and steps forward to wipe down the handle of the screwdriver (which is lodged in Tony's right eye) to remove Isaak's prints before calmly walking off. He again takes it in stride when Isaak kills Louis using Jurg's gun.

Jurg is proven to be as ruthless as his boss, as he warns Hannah he would hurt her badly if she tries to escape. However, in the end, Jurg is careless and underestimates Hannah.

Jurg hates American reality shows, claiming they're "shit." However, he seems to enjoy playing video games to pass the time. For example, while he is keeping Hannah hostage, he is seen playing Gran Turismo on a PlayStation 3.

Inside a mansion in Kiev, Ukraine, Jurg is standing near Isaak Sirko looking over paperwork when a call comes in. Jurg answers, informs Isaak that it's George Novikov, and hands over the phone to his boss.

The police are talking to George in The Fox Hole, a club near Miami, about a murdered stripper. When George returns to his office, he’s surprised to find Isaak waiting for him.

In a few moments, Jurg walks in, closes the door behind him, and stands silently observing the two as they talk, apparently as Isaak’s bodyguard. After Isaak confirms that George is telling the truth and he had nothing to do with the disappearance of Viktor Baskov, Isaak dismisses Jurg who then heads out the door.

When information about Tony Rush reaches Isaak, he and Jurg two pay him a visit. Jurg stands at the entrance to Tony's garage while Isaak stands inside, speaking with the former bouncer at The Fox Hole.

Tony frequently looks at Jurg and jokes about what's going on, but Jurg remains stern. Eventually, Isaak brutally kills Tony with a screwdriver through the eye and walks off. Jurg takes out a black cloth and wipes down the handle of the weapon before joining his boss.

While Isaak is sitting with a nervous Nadia in George’s office, Jurg enters with a plate of caviar for Isaak. After Nadia leaves with instructions to get close to Joey Quinn, Isaak discusses how to find Viktor. He believes that Viktor is wearing a bracelet with GPS and tells Jurg to find the IT man that set it up so it can be tracked.

Later, the IT man tracks the bracelet eight miles out to sea and Isaak realizes that Viktor is dead. Jurg, hoping to calm Isaak, says, “Maybe he took a boat offshore to avoid the police and then he threw the bracelet --” Isaak, though, replies furiously, “He's dead. He's dumped in the ocean, like a load of garbage.”

The IT man also finds the marina and slip location for the boat that dumped Viktor. Leading the way, Jurg uses the information to take Isaak and George to the spot. They find a man [Louis Greene] on the boat attempting to drill a hole in its floor and they assume he’s the boat owner. George and Isaak threaten him for answers. After they learn that it’s not his boat and instead belongs to Dexter Morgan, Isaak shoots Louis in the head. He orders George to get rid of the body and leaves with Jurg.

Attended by Jurg, Isaak and George go over the police files for Dexter and Louis. Having discovered that they both work for Miami Metro, Isaak thinks that Viktor was killed as payback because he killed a detective. George says that Dexter is not a cop and refers to him as a “lab rat.”

To get the cops off their backs, Isaak, Jurg, and George pay a visit to Alex Dubrozny, a bartender at The Fox Hole. They coerce him to write a suicide note in which he takes the blame for shooting Viktor. Jurg gives Alex a shot of vodka after which he’s ordered to shoot himself in the head.

Isaak is mildly wounded in the shoot-out in Mateo’s Bar. Back in George’s office, Jurg stitches up Isaak’s arm. George notices Quinn out in the bar and tells Isaak that they used to have an “understanding.” George says that if they left a bag of cash in his car, Quinn would look the other way. Isaak decides to try this tactic again. He gives an unspoken order to Jurg who leaves $10.000 in Quinn’s car.

Isaak is arrested due to blood evidence found at the crime scene in Mateo’s Bar.

While Isaak is in jail, Jurg becomes the bodyguard of George, but it’s actually to keep an eye on him for Isaak.

When Isaack is released from jail, Jurg and George are waiting outside, along with two cops assigned to follow him. Jurg is once again Isaak's bodyguard.

Isaak and Jurg enter Viktor’s apartment where they find the dead body of a hitman hired to kill Isaak. Jurg recommends that they return to Kiev since the Brotherhood might be of help. However, Isaak knows he's a dead man there since Jurg recognized the hitman as one of George's men. Isaak offers Jurg the chance to leave but Jurg refuses, saying that he goes where Isaak goes. Isaak thanks him for his loyalty. They call the police to investigate the dead body and decide to move into a hideout.

Jurg informs Isaak that the Brotherhood has sent hitmen Oleg Mickic and Benjamin Caffrey to eliminate him. Jurg listens as Isaak tries to call them off, but to no avail.

To force Dexter to kill the hitmen, Jurg kidnaps Hannah McKay at Isaak’s behest. Jurg tells her that her life is in Isaak's hands and if she tries to escape, he will hurt her badly.

The next day, as Jurg plays Forza Motorsport 4 on an Xbox 360 entertainment system, Hannah is allowed a short call from Dexter while Jurg listens. Dexter secretly takes and sends a photo of Hannah and the soccer ball behind her.

Hannah becomes tired of eating only cereal and asks Jurg to fetch some tomatoes in the backyard. When Hannah cooks the meal, she purposefully makes it too spicy and Jurg starts choking. She uses this opportunity to bash his head with a blender and they begin to struggle. Jurg stabs Hannah in the stomach and she hits his head with a lamp, which kills him. Debra arrives on the scene and saves Hannah before she dies. 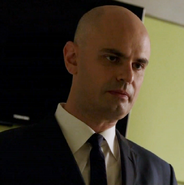 Retrieved from "https://dexter.fandom.com/wiki/Jurg_Yeliashkevych?oldid=123725"
Community content is available under CC-BY-SA unless otherwise noted.