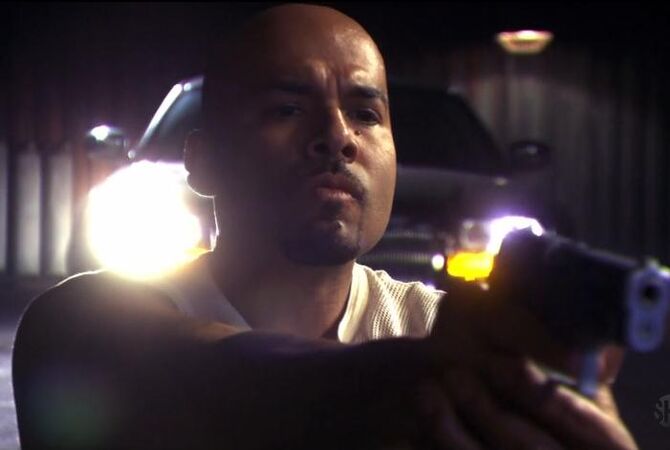 Julio Benes is a character on Showtime's series DEXTER.

An ex-convict who was head of the Locos gang in Miami, he had a history of "making people disappear." During a face-off with Brother Sam, he had an unforeseen run-in with Dexter Morgan, which led to his demise.

Julio is a large, muscled Latino man with multiple tattoos running along his upper arms, chest, and neck. He keeps his hair practically bald, but fashions himself with a goatee. He also has distinct tattoos on his eyelids and a mole just under his left eye.

Julio is a killer, and very direct when taking care of business. He runs his gang like a tyrant, as they torment locals in Miami. If someone dares to stand up to him or his gang, the person will vanish. This was the unfortunate case for one Hector Nunez, a worker at a local barber shop.

Brother Sam is confronted at his body shop by Julio regarding one of Sam's workers, Nick. When Dexter disarms and beats up one of his gang members, Julio pulls out a gun to make himself feel more powerful and dangerous. He backs down, however, when Dexter Morgan proves that he works with the police.

When Julio soon ends up on Dexter's table in Hector's barber shop, he's left to bare insults and threats that his gang will kill Dexter for this. He's not given a lot of time to speak so his confession to killing of Hector is put to rest just as quickly as Dexter slashes his neck.

Nick, a body shop mechanic under the employ of ex-convict turned man of the cloth, Brother Sam, begins to miss work. Sam, who knows of Nick's addiction to drugs, goes to his house in order to intervene...only to be shot at by Nick. This forces Sam to knock Nick out, carry him to his car, and head back to his body shop.

Dexter, who is tailing Sam (as a potential victim) thinks that he killed Nick, and follows him back to the body shop. Dexter ends up encountering Brother Sam, his dog, and ultimately Nick, who is unharmed, smoking in the garage. This puts to rest Dexter's suspicion that Sam is still a killer.

While Dexter is still at the shop, a car rolls up with three men inside. Julio, the leader of Locos, a local gang, approaches Sam looking for Nick. Sam tells them to leave as it is private property, but they refuse.

Dexter approaches, willing to aide Sam. He does this by quickly disarming and grounding one of Julio's assaulting thugs...to which Julio takes notice with a bit of trepidation at just how quickly it happened. To make sure that he doesn't lose the upper hand in this scenario, Julio pulls out a handgun and aims it at Sam. He says that he'll leave, but only with Nick in tow.

Sam stands strong. He tells Julio he's not afraid to die and quotes from the Bible. Not knowing if Sam is serious about dying or if he's just crazy, Julio considers whether or not to shoot Sam.

Dexter, not willing to take any chances, flashes his forensics badge and informs Julio that if either Sam or himself end up dead the whole department will be after them. At the request of one of his thugs, Julio decides to leave, but not without threatening Sam to avoid crossing him like the last guy who did. He reminds Sam of Hector Nunez and how his body was never found. Dexter takes note to investigate the claim.

Later, Dexter searches online. He pulls up Julio's police file and a news article about Hector Nunez. He finds that it's true that Hector went missing after having dealt with a local gang. Considering the testimony from Julio himself, this removes the usual investigative process and Dexter goes straight for the kill.

Dexter sedates and brings Julio back to the barber shop where Hector was killed. A few gunshots are seen piercing a mirror. Dexter wraps Julio with plastic while he sits in a barber chair. Julio threatens Dexter's life by the hands of his fellow gang members. Before again listening to a threat about Julio's boys, Dexter stuffs a piece of tissue in his mouth. He tells Julio that he will make it quick because he has a more important ritual to attend to, referring to Harrison's bath and bedtime story. Dexter lectures Julio for a moment before slashing his neck. After killing Julio, Dexter says, "...monsters don't get to live happily ever after."

Dexter and Julio in the barber shop

Retrieved from "https://dexter.fandom.com/wiki/Julio_Benes?oldid=104925"
Community content is available under CC-BY-SA unless otherwise noted.