Julie Benz (born 1 May 1972) is an American actress and former figure skater.

From 2006 - 2010, she played Rita Morgan, the girlfriend and later wife of Dexter Morgan, in Showtime's series DEXTER.

In response to her character being killed off, Julie Benz said the following:

"I was shocked because I loved being a part of the show. I loved playing Rita. I loved working with the cast and the crew and the writers. So it was quite shocking but I got over the initial, 'Oh my God, I just lost my job.' You're able to see it from a storytelling standpoint. It was aggressive storytelling and it needed to be done in many ways."

Benz was born in Pittsburgh, Pennsylvania, and grew up in Murrysville.

Benz competed in the 1988 U.S. Championships in junior ice dancing with her skating partner David Schilling, and finished in 13th place. When a stress fracture ended her skating career at age fourteen, she decided to try acting.

After graduating from high school, Julie entered New York University to study acting there. After graduation, Julie moved to Los Angeles to further pursue her career.

She married producer Rich Orosco in 2012. 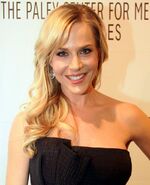 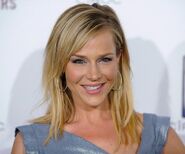